Home / Festival on the Hill

Festival on the Hill

Festival on the Hill

Puerto Rico in the 21st-Century: Music, Healing, and Change

In the last three years, Puerto Rico has experienced extraordinary challenges in the face of natural disasters and political upheaval. In their long history as colonial subjects and then U.S. citizens, Puerto Ricans on the island and in the diaspora have turned to music and dance as expressive forms of political, social, and environmental engagement—that is, expressive forms of direct action for healing and change.

The Department of Music’s 2020 Festival on the Hill, presented in collaboration with the Institute for the Study of the Americas and th UNC Latina/o Studies program, will celebrate Puerto Rico’s long histories of resiliency by featuring musical performances—including the North American premiere of Dr. Stephen Anderson’s Concerto for Puerto Rico—and public discussions that reflect on recent Puerto Rican events such as Hurricane Maria (2017) and the #RenunciaRicky movement and the musical implications therein.

The festival will feature a keynote speaker address (April 22, 5:00–6:15 p.m.) by Frances Negrón-Muntaner in Hill Hall 103 titled “Valor y Cambio’: Art, Storytelling and Decolonial Joy in Puerto Rico”. Valor y cambio is a story-telling, community-building, and solidarity economy project started by Frances Negrón-Muntaner and Sarabel Santos Negrón. The keynote address will be followed by the North American premiere of Dr. Stephen Anderson’s Concerto for Puerto Rico performed by the UNC Symphony Orchestra under the direction of Professor Tonu Kalam and featuring Dr. Juan Álamo as percussion soloist (April 22, 7:30 p.m., Memorial Hall). Concerto for Puerto Rico incorporates various folkloric rhythms, thematic materials, and political and programmatic elements that relate to the history of Puerto Rico and the rich cultural traditions of the island. Other performances will include a Latin music dance and reception featuring UNC Charanga Carolina (7:00 p.m.), the UNC Wind Ensemble and Symphony Band under the direction of Dr. Evan Feldman and Dr. Erin Cooper (April 21, 7:30 p.m., Memorial Hall) and the UNC Jazz Band under the direction of Professor Jim Ketch (April 24, 8:00 p.m., Moeser Auditorium). 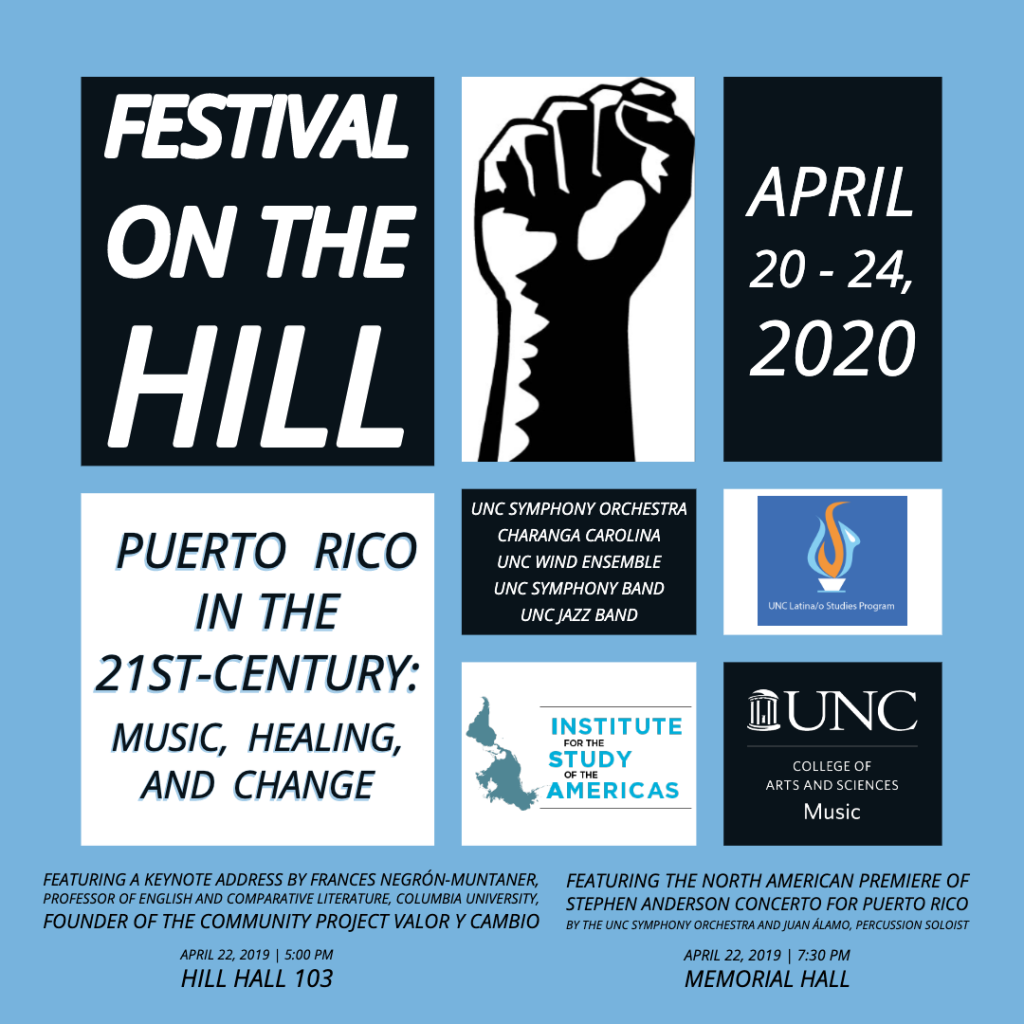 The Festival on the Hill is a biennial music festival presented by the UNC Department of Music based around a given theme. Past festivals have included “Music, Science, and Nature,” “Music at Black Mountain,” “CHAT Festival,” “Revisions and Rethinkings,” “Videmus at 25,” “Music and the Congo,” and “A Century of Movement.” The 2020 Festival on the Hill is presented in collaboration with the Institute for the Study of the Americas and the UNC Latina/o Studies program.