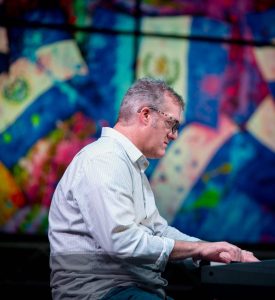 Described as “a true piano monster” (All About Jazz) and as “a bright star on the jazz horizon” (Musical Memoirs), STEPHEN ANDERSON is a critically acclaimed composer and pianist whose music has been published on nineteen compact discs through Summit, Albany, Nagel Heyer Records, and other labels. Many of Anderson’s recordings have appeared on the Grammy® Awards (53rd, 56th, 58th, 59th, 64th) and Latin Grammy® Awards (17th and 23rd) ballots representing Summit Records. For his work as composer, pianist, and band leader for the Dominican Jazz Project, his recordings have been praised as “vibrant, passionate music” (JAZZIZ) and “more sizzling than fried peppers and onions” (Jazz Weekly). Anderson’s composition, Un Cambio de Ritmo, was listed in All About Jazz’s top “Popular Songs: 2021,” and the Desde Lejos CD was listed on Root’s Music Report, “Top Jazz Album Chart 2021.” The Dominican Jazz Project was recognized in both Mark Sullivan’s “Best Releases of 2016” (All About Jazz) and Ken Frackling’s “2016 Best Latin/Brazilian Jazz Recordings” (Jazz Notes).  Both the Stephen Anderson Trio Nation Degeneration and Forget Not CDs received 4½ stars (out of 5) from the All Music Guide, and Forget Not was nominated best jazz “Debut CD” at the 3rd Annual Village Voice Jazz Critics Poll (2008). Anderson’s recordings have received feature reviews in JAZZIZ, All Music Guide, All About Jazz, Jazz Weekly, Jazz Times, Jazz en Dominicana, Musical Memoirs, and Root’s Music Report.

His work with the Dominican Jazz Project and Marimjazzia Latin jazz ensembles have led him to perform at multiple festivals in the Caribbean, as well as in Central and South America since 2014. Associated with the 2022 Jazzomania Jazz Festival IV, and as founder and director of the Dominican Jazz Project, Anderson was formally recognized and distinguished by the Minister of Culture, Señora Milagros Germán, government of the Dominican Republic for “his research and contributions to the national musical heritage” have “generated pieces and compositions whose contents are based on the roots of native Dominican music that “have traveled with our seal of identity.” The Dominican Jazz Project was invited to the Palacio Nacional for the “condecoración” ceremony of bandmate, Guillo Carias, by President Luis Rodolfo Abinader, President of the Dominican Republic.  The DJP appeared on MúsicaPress TV (2021), and several articles have been published about the group in Santo Domingo newspapers (REPORTEEXTRA, Areito, Vivir.Alegria). “His research and contributions to the national musical heritage” have “generated pieces and compositions whose contents are based on the roots of native Dominican music that “have traveled with our seal of identity.”
—Formally distinguished and recognized by the Minister of Culture, Señora Milagros Germán, Government of the Dominican Republic (April 2022)

“Anderson is a wonderful composer…setting the tone for music that superbly captures the West African influences and inflections of the Taíno people, making for the unique Caribbean sound palette.”
—Raul Da Gama, Latin Jazz Network

“Can you think of a better close [to the festival] than this?  The Dominican Jazz Project is a national pride that delights us today.”
—The Dominican Republic Jazz Festival (Sosúa, DR)

“In the area of harmony and rhythm [Anderson] is influenced by jazz.  Inspired by the biblical texts of the prophet Isaiah, he speaks in a modern, contemporary language, and at the same time perfectly understandable.”
—Lleida Diari (Lleida, Spain)

“The pocket he plays in is precise and intense, whether he imposes alien forms onto his pieces or simply thwarts the expectations of rhythm and harmony…there is no question of the beauty in Anderson’s playing…”
—Jay Deshpande, All about Jazz

“…Quest…composed by Stephen R. Anderson, establishes a method of creating a four-part texture by just two instruments. This, to my ears, is the most innovative work on the CD, and is really quite striking in its originality.”
—David DeBoor Canfield, Fanfare Magazine (review of Quest, by Duo XXI, Albany Records)

“…an exemplar of the scholar-musician.”
—Jay Deshpande, All About Jazz

“Isaiah is a powerful work, full of colors both vivid and, at times, pastel. The audience received this premiere performance with enthusiastic applause, with good reason.”
—Geoffrey Simon, Classical Voice of North Carolina

“…full of creative energy and the joy of musical discovery.”
—Mark Sullivan, All about Jazz (review of the Dominican Jazz Project, Summit Records)

“Stephen Anderson’s piano playing is a bright star on the jazz horizon.” “This music [is] spirited and joyful, even in the face of COVID and so much death and sadness.  This music is healing.  These songs uplift and give hope.”
—Dee Dee McNeil, Musical Memoirs August 2021 post, “Best of the Best” (Dominican Jazz Project, Desde Lejos, Summit Records)

Personal loss and physical separation couldn’t dim the spirit of The Dominican Jazz Project.  Every Bit as remarkable as the vibrant, passionate music on Desde Lejos…is the mere fact of it’s existence [i.e., due to the pandemic].
—Michael Roberts, JAZZIZ

“…A reminder of the power of music and brotherhood.”
—Mark Sullivan, All About Jazz (Dominican Jazz Project, Desde Lejos, Summit Records)

“Stephen Anderson punctuates his solos with a high degree of rhythmic diversity, demonstrating marvelous touch and interplay…”
—Nicholas F. Mondello All About Jazz (Review of Jim Ketch, A Distant View)

Dominican Jazz Project, Anderson, director, pianist, and composer.  Recorded remotely during the pandemic between members of the band living in the Dominican Republic, Puerto Rico, Cuba, and North and South Carolina (Summit Records 2021)

Isaiah, an oratorio for SATB choir, string orchestra, and piano

“Isaiah is a powerful work, full of colors both vivid and, at times, pastel. The audience received this premiere performance with enthusiastic applause, with good reason.”
—Geoffrey Simon, Classical Voice of North Carolina

“…the most innovative work on the CD, and is really quite striking in its originality”
—critic David Deboor Canfield  (Issue 34:5 May/June 2011)

The Dominican Jazz Project, Desde Lejos
Recorded remotely during the 2020-21 pandemic with musicians living in the Dominican Republic, Cuba, Puerto Rico, and North and South Carolina. The longtime bassist for the DJP, Jeffry Eckels, passed away unexpectedly July 3, 2020 right as the band was preparing to record. Amazon
LISTEN: https://soundcloud.com/dominicanjazzproject/sets/desde-lejos-cd-2021
VIDEO DOCUMENTARY: https://youtu.be/Nf3OlXhmcE4

“Full of creative energy and the joy of musical discovery.”
—Mark Sullivan, All About Jazz
LISTEN: https://soundcloud.com/dominicanjazzproject/sets/dominican-jazz-project-summit

“Critically acclaimed, generously reviewed composer and pianist, Stephen Anderson, revs it up to the maximum on this very special outing for his trio – plus the addition of Joel Frahm – making a premium quartet. Explosive program of really satisfying jazz tunes…very enjoyable.”  Represented Summit Records at the 56th annual Grammy® Awards.

4½ stars (out of 5) “Highly recommended.” Ken Dryden, All Music Guide.   Represented Summit Records at the 53rd Grammy® Awards in the category of “Best Jazz Instrumental Album”

The Stephen Anderson Trio – Forget Not

The Lynn Seaton Trio – Puttin’ on the Ritz A Love for Latin Rhythm from UNC Research on Vimeo.