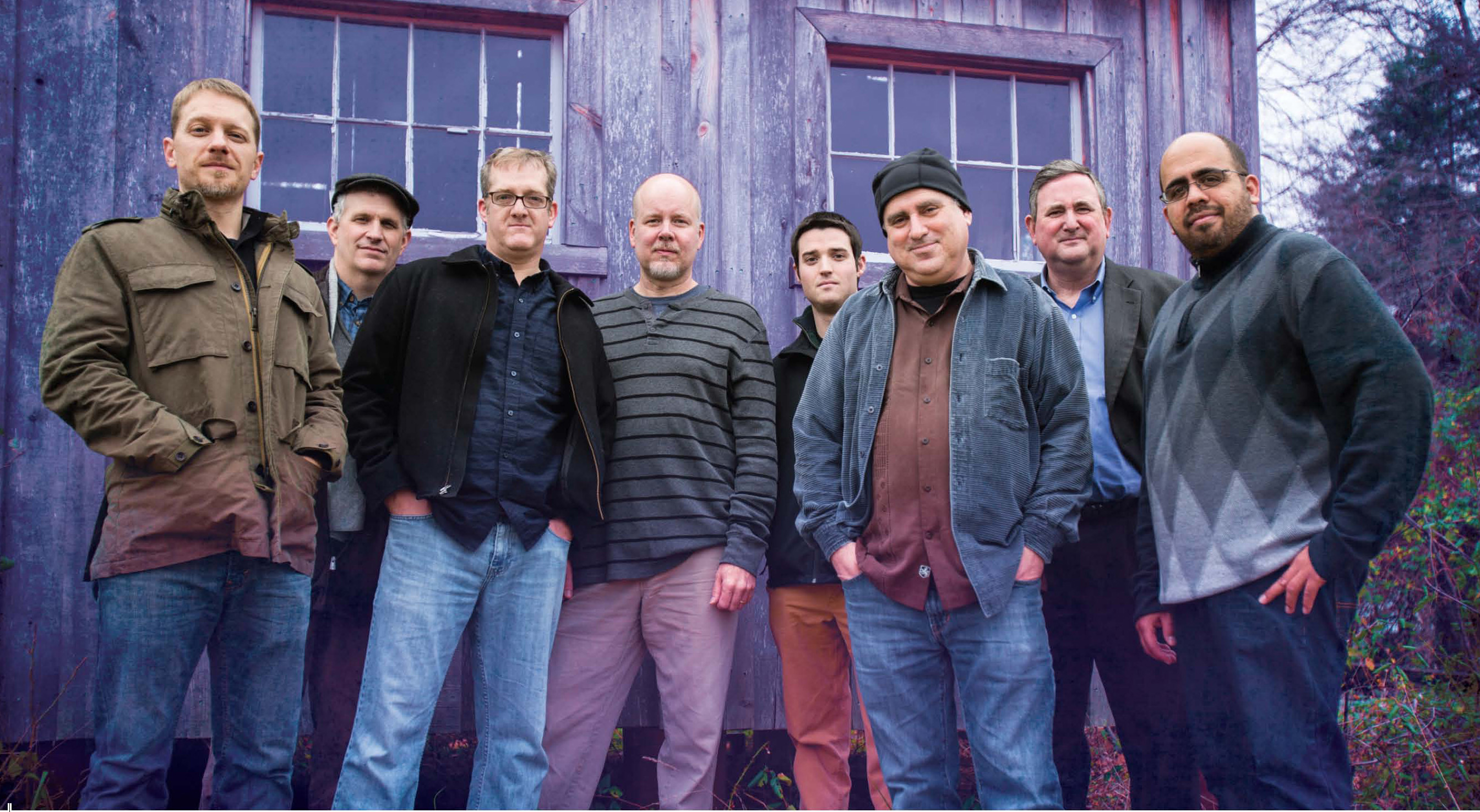 Distracted Society is the third Summit Records CD featuring trumpeter and jazz educator JIM KETCH (Next Set, 2009 & A Distant View, 2012). Ketch is Professor of Music and Director of Jazz Studies at the University of North Carolina at Chapel Hill. He has served the Department of Music as Chair and has been the recipient of four university teaching awards. He is Associate Director of Swing Central Jazz for the Savannah Music Festival a program he helped develop with Marcus Roberts and Rob Gibson. He has conducted a number of all-state and regional jazz ensembles. Ketch serves as a trumpet faculty member at the Jamey Aebersold Summer Jazz Workshops and is host (at UNC) to a regional Essentially Ellington Jazz Festival operated in conjunction with Jazz at Lincoln Center. He has led the North Carolina Jazz Repertory Orchestra for two decades and has recorded three CDs with that ensemble in addition to mounting large scale productions of Duke Ellington’s Sacred Music for Public Television. His small group jazz playing has led him to Snug Harbor (New Orleans), Blues Alley (Georgetown); Bohemian Caverns (Washington D.C.) and The Blue Wisp (Cincinnati). Ketch has shared the stage as trumpet and conductor with a wealth of artists including Branford Marsalis, Rene Marie, John Pizzarelli, Natalie Cole, Aretha Franklin, The Manhattan Transfer, The Four Tops, The Temptations, Tom Harrell, The Marcus Roberts Trio, Gene Krupa Orchestra, Jimmy Dorsey Orchestra, Lee Konitz, and Joel Frahm. He has appeared in Carnegie Hall and performed and conducted in England, Switzerland, France, and The Netherlands. A native of High Point, North Carolina, JOHN PARKER has been Principal Trumpet of the Charlotte Symphony Orchestra since January of 2014. Prior to joining the symphony, John was a Kenan Music Scholar at the University of North Carolina at Chapel Hill, where he received his Bachelor of Music. There he studied with James Ketch, and was also able to study extensively with Tim Hudson, Professor of Trumpet at Gardner Webb University. He was at the top of his class in the music department and graduated summa cum laude. John also attended the Aspen Music Festival and School on a full fellowship in both 2012 and 2013. There he studied with Ray Mase and Kevin Cobb of the Juilliard School, as well as Thomas Hooten, David Bilger, and Mark Inouye of the Los Angeles Philharmonic, Philadelphia Orchestra, and San Francisco Symphony respectively. In 2012, John placed 3rd in the undergraduate division of the National Trumpet Competition, and placed again as a semi-finalist in 2013. In addition to the CSO, John has performed as Principal Trumpet of the Roanoke Symphony Orchestra and the Charleston Saxophonist, DAVE FINUCANE performs with Scott Sawyer’s Quartet and has performed with George Russell’s Living Time Orchestra, Gunther Schuller, Orange Then Blue, John Hart, Jonathan Kreisberg and Shunzo Ono. He has recorded one cd as a leader entitled Valerie’s Song (2006) and can be heard on eleven other cd’s including Scott Sawyer’s latest release, Dreamers and Jim Ketch’s A Distant View. Dave is director of the Durham Jazz Workshop/Sharp 9 Gallery, a community-based jazz performance and teaching venue, and also teaches saxophone at UNC-CH and jazz improvisation at Duke University. From 2000-2005, he directed, One Station Plaza, a performance/teaching venue in Peekskill, NY. Finucane is a graduate of New England Conservatory. Sawyer is a Teaching Instructor at East Carolina University in the School of Music (Jazz; Applied Lessons and Jazz Chamber Combos). He’s also Lecturer of Jazz Guitar (private lessons) at the University of North Carolina-Chapel Hill, and leads a Small combo & Group Guitar class at the Durham Jazz Workshop. JUAN ÁLAMO is an internationally known performer, composer, and educator. Álamo has presented solo recitals at universities and percussion and jazz festivals throughout the United States, Central and South America, the Caribbean and Europe. He has recorded and shared the stage performing in collaboration with renowned artists such as Keiko Abe, Ney Rosauro, Tito Puente, Arturo Sandoval, Dave Samuels, Michael Spiro, Ted Piltzecker and famous conductors such as Sergiu Comissiona and Krzyszt Penderecki. Álamo has also authored two keyboard percussion books: “Milt Jackson: Transcribed Solos of the Master” and “Four Mallet Music for the Modern Marimba Player”. He has also recoded two solo marimba albums: Remembrance (2007) and Marimjazzia (2014). Álamo is an assistant professor at UNC Chapel Hill and an artist-clinician for Encore Mallets Inc., Yamaha and Meinl percussion. JASON FOUREMAN is in demand as a performer, clinician, and educator. Born in Durham, NC he received his undergraduate degree from the University of North Carolina at Greensboro in 2000. In 2005, he was awarded a teaching assistantship at the University of Louisville where he taught and received his Masters degree in Jazz Studies. Currently, Foureman is on faculty at UNC-Chapel Hill, UNC-Wilmington and NC State and has been the bassist for the North Carolina Jazz Repertoire Orchestra (NCJRO) since 2007. In addition to his teaching responsibilities, Foureman has performed with Cedar Walton, Eric Alexander, Jim Snidero, Jamey Aebersold, Kenny Werner, Terri Lyne Carrington, Joel Frahm, Slide Hampton, Dave Leibman, John Pizzarelli, Renee Marie, Branford Marsalis, Gary Smyulen, Conrad Herwig, Brian Lynch, Joe Magnerelli as well as many others. He resides in Chapel Hill, NC with his wife, Megan, and their two daughters. DAN DAVIS (B.M.- Music Education/Percussion – East Carolina University; M.M.- Jazz Studies/Performance – North Carolina Central University, Summa Cum Laude) Studied drumset with David Via, Keith Copeland, and Thomas Taylor. Dan received the A.J. Fletcher music scholarship to study percussion at East Carolina University. He was the 1987 M.T.N.A.- Wurlitzer competition national winner in percussion and in 1988, won the E.C.U. concerto competition performing Paul Creston’s, Concertino for Marimba (3rd mvt.) with the E.C.U symphony Orchestra. In 1989, Dan received the Farmville Friends scholarship. Dan moved to the Raleigh/Durham/Chapel Hill area in 1990 and began a long association with many of the finest musicians in the region. He is an active educator and clinician. From 2002-2005, Dan was a band director at the Durham School of the Arts in Durham, N.C., receiving the Claus Nobel educator of distinction award in 2005. Currently, he maintains a full schedule of students and performs in many different styles of music. He is an adjunct professor of Jazz drumset, Jazz history, and directs Jazz combos at UNC-Chapel Hill, East Carolina University, and UNC-Pembroke. As an educator, he has performed with artists Joe Chambers, Claudio Roditi, Conrad Herwig, Eric Alexander, Ben Allison, The North Carolina Jazz Repertory Orchestra, Gary Smulyan, Lynn Seaton, Jeb Patton, and many others.