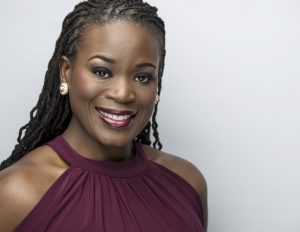 Applauded for her “wonderfully rich,” “powerful,” and “captivating” voice, American singer LaToya Lain, a native of New Orleans, Louisiana, currently serves on the voice faculty of the University of North Carolina at Chapel Hill where she provides private, individual vocal instruction as well as teaches The History and Performance Practice of the Negro Spiritual. Equally at home in the teaching studio and on the performance stage, LaToya recently made her Metropolitan Opera Debut as part of the star-studded cast of The Gershwin’s Porgy and Bess. She has also performed Porgy and Bess at the Alte Oper in Frankfurt, Hamburgische Oper, and the Köln Philharmonie.

She recently presented solo recitals at Kenyatta University in Nairobi, Kenya, the American Church in Paris, the Dutch Reform Church in Harare, Zimbabwe, at the Reapertura de la Iglesia Santa Teresa in Cochabamba, Bolivia, and The International Congress of Voice Teachers in Stockholm, Sweden.

She also presented recitals and master classes at numerous colleges, universities, and conservatories throughout the United States and abroad.

Dr. Lain’s research includes the intensive study and performance practice of Negro Spirituals. She has performed her lecture recital “Narrative of a Slave Woman: Songs of Hope, Justice, and Freedom” on concert stages and universities throughout the world. Consequently, she was one of 57 experts invited to author a short chapter in The Voice Teacher’s Cookbook: Creative Recipes for Teachers of Singing, as part of a series addressed to various groups of musicians and was published this summer by Meredith Music Resources.

This past season, LaToya held an Artist-in-Residency at the Shenandoah Conservatory, where she presented master classes and a solo recital in collaboration with The Juilliard School Head of Collaborative Piano and internationally acclaimed pianist, Margo Garrett. She was also featured in concert at the University of Minnesota, where she presented a joint lecture recital with famed composer, Libby Larsen.