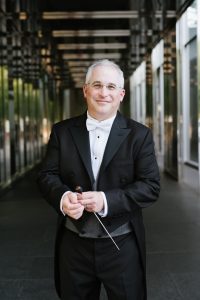 Dr. Evan Feldman is Director of Wind Studies and Professor of Music at the University of North Carolina at Chapel Hill where he conducts the Wind Ensemble and teaches courses in conducting and music education.  He also directs the Triangle Wind Ensemble and serves as Principal Guest Conductor of the Greensboro Symphony, where he conducts education, holiday, and pops concerts.

He is an active guest conductor, clinician, and adjudicator in and outside of the United States, with recent engagements in Spain, Switzerland, Romania, Belgium, and Tanzania, as well as all-state, all-district, and all-county honor bands in the United States. Under his direction, the UNC Wind Ensemble has twice been invited to perform at the College Band Directors National Association southern division conference.  He has been described as “…the real thing – a conductor with evident ensemble-building skills who knows his way around the podium…”

In 2020, Dr. Feldman’s college textbook, Instrumental Music Education (Routledge Publishing), was released in its third edition and has been adopted by university music education programs throughout the country. He is the author of the first MOOC (massive open online course) dedicated to conducting and rehearsal technique.  Over 25,000 students have enrolled through Coursera.org.

Dr. Feldman earned the Doctor of Musical Arts in Conducting from the Eastman School of Music in Rochester, New York, where he studied with Donald Hunsberger and Mendi Rodan and served as an assistant conductor for the Eastman Wind Ensemble and Eastman Wind Orchestra.  He received his Masters in Conducting from Ithaca College and his Bachelor of Arts in Music from Duke University. He previously taught high school band in Hicksville, NY.