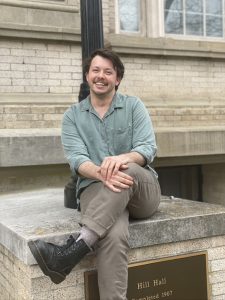 Elias Gross, ​​third-year graduate student, started playing viola at the age of 11. Music has kept a strong and meaningful place in his life and shaped him into the person here today. Gross holds a master’s in viola performance from the University of Delaware and a Bachelor’s in arts administration and art history from the University of Kentucky. In between degrees, Gross worked for six years in non-profit arts leadership, graphic design, and private music teaching. Having played viola for so much of his life, Gross wanted to take a break, so he decided to pursue graduate school on the track of musicology.

Recently, however, the viola came back into his life when he played for Vanessa Davis’ album “Pretty Little Cabin: A Quarantine EP,” which won Album of the Year at the 8th Lexington Music Awards on February 6, 2022. In 2020, he received a Facebook message from a friend from his undergraduate orchestra, asking if he would like to be a part of a remote recording project. With his “yes” mindset, he agreed immediately. The recording was for a quarantine album that Vanessa Davis had written and wanted to bring to life.

This album included Robbie Humphreys, sound engineer, Seth Murphy on the cello, Elizabeth Varnado on the violin, and Cole Clark on percussion. It began with Davis sending out a demo for everyone on the album to listen to and record their own parts. Gross recorded his part in his home office in Carrboro.

“Trying to record with my cat around was not exactly what I’d call ideal for music producing,” said Gross. “Another hard part was that being a viola player, I am used to backing up the melody, being the middle voice instrument, and playing harmony, so doing this alone was a really bizarre experience.”

Gross believes this project was the start of finding his instrument again. It gave him an outlet to be creative again, and he would love to keep broadening this experience. Currently, he is playing viola and mandolin with the UNC Baroque Ensemble. He’ll be a featured viola soloist on the Bach Brandenburg Concerto No. 6 and as a mandolin soloist on the Vivaldi Mandolin Concerto for their spring concert in April.

Gross believes everything is connected, which is exactly why playing the viola connects so well with his graduate research. Since coming to UNC, he has dived more into the realm of Appalachian music and labor. He finished his master’s thesis in the fall on the ethics of feminist musical labor, and the ways it shows up in everyday life.

No matter how hard he has tried, Gross cannot stay away from the viola. He is excited to continue on his journey, and see what the future has in store, whether that is regarding his research, playing the viola, or the next “yes” moment that comes his way.