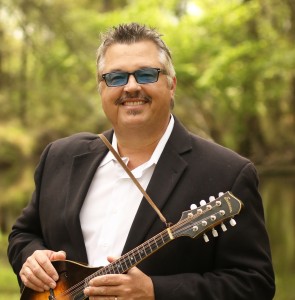 Growing up on a farm in rural Four Oaks, North Carolina, Russell’s first exposure to bluegrass was from an older brother. He got his first mandolin as a freshman at the University of North Carolina at Chapel Hill in 1982, and his first “official” show was in August of 1989. Since then Russell has worn a lot of different hats in the music business such as singer, songwriter, producer, mandolinist, recording and sound engineer, band leader, record label and studio owner.

A compelling songwriter Russell has charted over thirty original songs, thirteen landing on the Bluegrass Unlimited National Bluegrass Survey. (Including four #1 singles for the Grass Cats.) The Society for the Preservation of Bluegrass Music in America (SPBGMA) has nominated him three times for Songwriter of the year and as a producer, he has nine Top Ten CDs to his credit.

As band leader and front man for two popular bands he has performed throughout much of the United States and Canada. In 1989 Russell formed New Vintage and they went on to win the Pizza Hut International Bluegrass Showdown and the SPBGMA National Band contest, both in 1993. With this success they became a mainstay on the bluegrass festival circuit and charts for much of the 90’s. They recorded five projects including three Top Ten CDs for Pinecastle Records. Russell started The Grass Cats in 1997 with other local pickers as a “pick up band” to play small local events. When New Vintage stopped performing in October of 2000 he focused his efforts on The Grass Cats and since then they have released nine CDs and continue to perform and record. He also performs and records with Diamond Creek. With an immediately recognizable bluesy tenor, Bluegrass Unlimited magazine said that his voice “has got that ‘lonesome’ quality that makes even a just written tune sound a hundred years old,” and placed him in “the first ranks of contemporary bluegrass.”