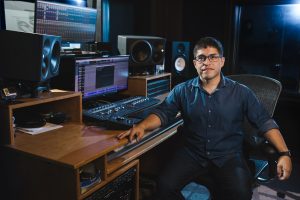 Pablo Vega (Lecturer) is an audio engineer and composer living in Durham, North Carolina. Originally from Lima, Peru, he and his family moved to Chapel Hill in 1992 where his love of Carolina was nurtured. He received a Bachelor of Music (2008) from the University of North Carolina at Chapel Hill, professional certificates in audio engineering (2013) from Living Arts College and Berklee College of Music, and has been working as a composer and audio engineer professionally since 2009. He owns and runs the recording studio “The Workshop”, the a cappella production company “The Vocal Company”, and has composed and scored music for over 20 video games, documentaries, films, and TV shows.

He is a member of the American Society of Composers, Authors and Publishers (ASCAP), the Audio Engineering Society (AES), Phi Mu Alpha Sinfonia (Alpha Rho Chapter), and was recently inducted into the Recording Academy/GRAMMYs as a voting member. He records many local artists, choirs, and orchestras, was an engineer on the 2019 CBS Christmas Special alongside the multi-Grammy winning team of Blanton Alspaugh, John Newton, and Mark Donahue of SoundMirror, and an engineer on the 2020 PBS New Year’s Eve Special “United In Song: Celebrating The Resilience of America” featuring Patti Labelle, Juanes, Joshua Bell, Renée Fleming, Denyce Graves, Josh Groban, Yo-Yo Ma, Audra McDonald, Brian Stokes Mitchell, Jean-Yves Thibaudet, the American Pops Orchestra, the National Symphony Orchestra, and many more incredible artists.