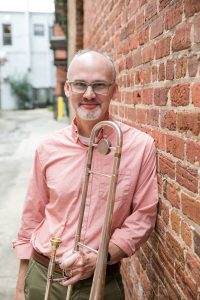 Apart from his ensemble work on the modern trombone, Mr. Kris is an active soloist and clinician on historic trombone, performing and teaching internationally. Most recently, he presented concerts in London with Kings College, London, and at the prestigious Salzburg Festival. At the University of North Carolina, he teaches low brass and chamber music. His research concentration is historic trombone and ensemble music of the late Renaissance and the early Baroque.

Mr. Kris attended McNeese State University earning a Bachelor of Music Education followed by a Master of Music in Trombone Performance at the Cincinnati College/Conservatory of Music. His principal teachers are William G. Rose and Tony Chipurn, Principal Trombone (retired) of the Cincinnati Symphony Orchestra.