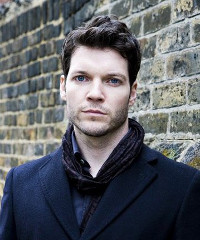 A native of Wellsboro, Pennsylvania, bass-baritone Marc Callahan (Assistant Professor) received his Bachelor of Music degree from Oberlin College where he studied with the renowned pedagogue Richard Miller. He holds a Master of Music degree from the Cincinnati College Conservatory of Music and a Doctor of Musical Arts in vocal performance and opera direction from the same institution. Dr. Callahan was also the recipient of the Rotary Scholarship from the Cincinnati Chapter, which allowed him to travel to France, where he earned a Diplôme Supérieur d’Exécution de Chant from the École Normale de Musique de Paris and a Diplôme d’Artiste Lyrique from the Schola Cantorum. He studied French at the Institut de Touraine and French art song with mentor François Le Roux at the Académie Françis Poulenc. He was winner of the Prix Lili Boulanger at the Concours International d’Interprétation de la Mélodie Française and has sung a duo recital of French song alongside the legendary soprano June Anderson and pianists Noël Lee and Jeff Cohen.  While at university, he apprenticed with the Central City Opera (where he was awarded the Studio Artist Award), Des Moines Metro Opera, Sarasota Opera, Santa Fe Opera, Britten-Pears Academy and the Centre National d’Insertion Professionelle des Artistes Lyriques.

As an opera director, Dr. Callahan has received critical acclaim for his production of Jean-Philippe Rameau’s Les Indes Galantes, saying it was “designed and directed with jaw-dropping invention.” He has also assisted on Martin Duncan’s productions at the Royal Opera House, the Aldeburgh Festival and the Holland Festival (The Cure/The Corridor), acted as collaborateur artistique on Les Fiançailles au Couvent at the Théâtre du Capitole, provided research for Thomas de Mallet Burgess’s La Vestale for the Wexford Festival and observed Bijan Sheibani on The Virtue of Things for the Royal Opera House. Recent productions include Mozart’s The Marriage of Figaro and Louis Aubert’s The Blue Forest (National Opera Association Prize Winner 2017) for Oregon State University’s opera program, where he was a Visiting Professor in Opera and Voice.