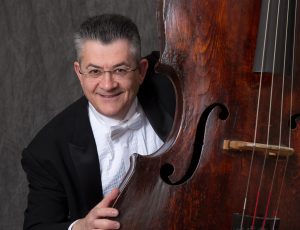 As a soloist, he has made numerous concerto appearances with the North Carolina Symphony, Young Artists Orchestra at the Eastern Music Festival, East Carolina University Orchestra and the Peninsula Music Festival Orchestra in Wisconsin including works by Bottesini, Bruch, Koussevitsky and Tubin.

Upon arriving here in the U.S., Mr. Finkelshteyn attended the Aspen Music Festival where he won the E. Nakamichi Double Bass Competition, performing the Koussevitsky Concerto with the Festival orchestra. Other artistic pursuits have included tours with the Chicago Symphony, the New York Philharmonic and the Philharmonia Hungarica. In addition, Mr. Finkelshteyn has appeared with the St. Louis, Cincinnati, Dallas Symphonies and Mostly Music Festival as guest principal Bassist.

He has also performed with the Lyric Opera of Chicago, the Milwaukee Symphony, the Baltimore Symphony, the Cleveland Orchestra, and appeared with the All Star Orchestra under the direction of Gerard Schwarz as part of an award-winning series of programs for PBS.

A committed teacher, Mr. Finkelshteyn was invited to give master classes at Yale University and in NYC for students from the Manhattan School of Music and the Mannes College of Music, Penn State and NC School of Arts among others.

He makes a point of being involved within his community as well, leading sectionals for local Youth Philharmonic Orchestras and the NC All State Orchestra. In addition, Mr. Finkelshteyn works with local music teachers with their double bass students offering master classes and sectionals.

A native of Leningrad in the former Soviet Union, he joined the Symphony Orchestra of the Leningrad Philharmonic at only 19 years of age, while still a student at the Leningrad Conservatory from which he earned a M.M., graduating with honors.

His primary teachers were Peter Weinblatt and Sergei Akopov. Eventually, he became principal bassist of the Symphony Orchestra and was a prize winner of the Soviet Union Bass Competition before emigrating to the U.S. in 1990.