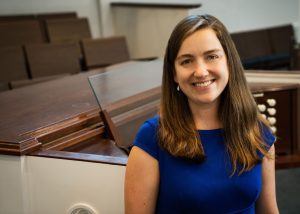 Laura Buff Alexander (Lecturer) conducts the UNC Glee Club. In addition to her work at UNC, she serves as Associate Director of Music at Westminster Presbyterian Church in Greensboro, where she directs the chancel and handbell choirs and plays organ and piano for services. She previously served as Cantor at Holy Trinity Lutheran Church in Chapel Hill, where she directed choirs for a wide range of age groups. Alexander also serves on the faculty of Spoleto Study Abroad in Spoleto, Italy.

In addition to her work as a conductor, Alexander continues to perform in recital and concert settings. Recent solo engagements include Vaughn Williams’ Serenade to Music, Handel’s Messiah, Copland’s In the Beginning, and Mozart’s Missa Brevis in F Major.

Alexander received her M.M. in Voice Performance from UNC Greensboro, where she studied with Clara O’Brien. In her undergraduate studies at UNC-Chapel Hill, she received a B.M. in Vocal Performance and a B.A. in Romance Languages (Italian). She also received an M.T.S. from Duke Divinity School, where she focused on the intersection of theology and the arts.