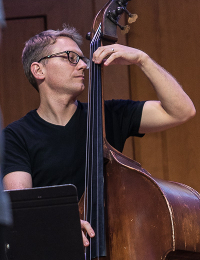 Jason Foureman (Lecturer) was born in Durham, N.C. He received his undergraduate degree from the University of North Carolina at Greensboro in 2000. In 2005 he was awarded a teaching assistantship at the University of Louisville where he taught and received his Masters degree in Jazz Studies. While at the University of Louisville, Foureman had the unique opportunity to travel throughout Russia, Finland, Estonia, and Sweden performing and teaching jazz clinics. In 2006, Foureman was awarded a position in the Betty Carter Jazz Ahead program and had performances in Washington, DC at the Kennedy Center.