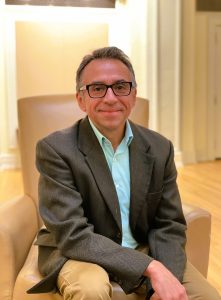 David Garcia (Professor) earned his PhD in ethnomusicology from The City University of New York, The Graduate Center. Published in Journal of the American Musicological Society, Journal of the Society for American Music, The Musical Quarterly, MUSICultures, and other academic journals, his research focuses on the music of the Americas with an emphasis on black music and Latin music of the United States and a theoretical focus on race and racism.

He teaches undergraduate courses in music of Latin America and world music, and graduate seminars in ethnomusicology, historiography, and popular music. He is also director of UNC’s Charanga Carolina, which specializes in Cuban danzón and salsa music. The Society for Ethnomusicology awarded his book, Listening for Africa: Freedom, Modernity, and the Logic of Black Music’s African Origins (Duke University Press, 2017) the 2018 Bruno Nettl Prize for Outstanding Publication in the History of Ethnomusicology. The Society for Ethnomusicology and the British Forum for Ethnomusicology also recognized the book with an Honorable Mention for the Alan P. Merriam Prize for Outstanding Book in Ethnomusicology and Commendation, respectively. The Association for Recorded Sound Collections awarded his first book, Arsenio Rodríguez and the Transnational Flows of Latin Popular Music (Temple University Press, 2006), a Certificate of Merit in the category Best Research in Folk, Ethnic, or World Music. He is currently editing an anthology of Latin music, dance, and theater in the United States, 1783–1900. He has done research throughout the United States, Cuba, Puerto Rico, and Curaçao.

Garcia served as editor-in-chief of the Journal of the Society for American Music (2020–21). He is also a recipient of a National Endowment for the Humanities fellowship (2014–15). He has presented his research at conferences organized by the Society for Ethnomusicology, Cuban Research Institute, Casa de las Américas, and Latin American Studies Association. He was named Visiting Scholar at the Cristobal Díaz Ayala Collection of Cuban and Latin American Popular Music by the Cuban Research Institute, Florida International University. Garcia is currently serving on the Scholarly Advisory Committee of the National Museum of the American Latino, Smithsonian.

2018   “‘A Strange Sound, between Crying and Chanting’: The Malagueña and Audile Techniques of American Imperialism at the End of the Nineteenth Century.” In Spaniards, Natives, Africans, and Roma: Transatlantic Malagueñas and Zapateados in Music, Song, and Dance, edited by K. Meira Goldberg, Walter Clark, and Antoni Pizà. Newcastle upon Tyne: Cambridge Scholars Publishing (in press).

2017  “Listening Across Boundaries: Soundings from the Paramount Ballroom and Boyle Heights.” In The Tide Was Always High: The Music of Latin America in Los Angeles, edited by Josh Kun, 153–62. Berkeley: University of California Press.

2010   “Contesting That Damned Mambo: Arsenio Rodríguez, Authenticity, and the Puerto Rican and Cuban Music Cultures of El Barrio and the Bronx, 1950s.” In The Afro-Latin@ Reader: History and Culture in the United States, edited by Miriam Jiménez and Juan Flores, 187–98. Durham, NC: Duke University Press.

“When the Borders First Crossed Us: A Latinx Musicology for Trumpism” (in progress).