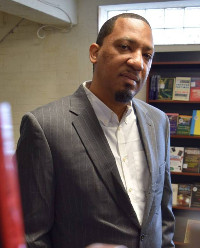 Dasan Ahanu (Lecturer) is an artist, educator, and organizer living in Durham, North Carolina. In addition to performing, Dasan has hosted or coordinated many poetry, jazz, Hip Hop, and cultural arts events. He has founded cultural and performing arts organizations in North Carolina. He has been featured on national radio and TV and has published three books of poetry.  He has also released a number of Hip Hop and Spokenword recordings.

Dasan believes in using his skill and resources to aid in developing the community and further social change. He has worked as an organizer on such issues as war, social injustice, workers rights, domestic violence and sexual assault; planned and facilitated community programs for Duke University’s Center for Documentary Studies; conducted creative writing and performance workshops at middle schools, high schools, and colleges throughout North Carolina; and spent time working with at-risk/court-involved youth. In addition to advocating for further support of poetry and spoken word programming, he has lectured on topics such as the impact of cultural arts programming, the arts and social justice, Hip Hop culture, Hip Hop pedagogy, and the arts as a tool for literacy. As a resident artist with the St, Joseph’s Historic Foundation/Hayti Heritage Center in Durham, NC he has developed poetry and spoken word programming for youth and adults and worked to grow the Triangle’s arts community.

Dasan is president of the Black Jedi Zulus, a community organization focused on service and fostering greater cultural awareness of Hip Hop. He served as a Artist-in-Residence and Assistant Professor of English at Saint Augustine’s University in Raleigh, NC from 2006 to 2015. He was the 2015-2016 Nasir Jones Fellow with the Hip Hop Archive & Research Institute at Harvard University’s Hutchins Center for African & African American Research. He has a BS in Organizational Management from Saint Augustine’s University and a MLS in Art & Culture with a concentration in Creative Writing from the University of Denver.