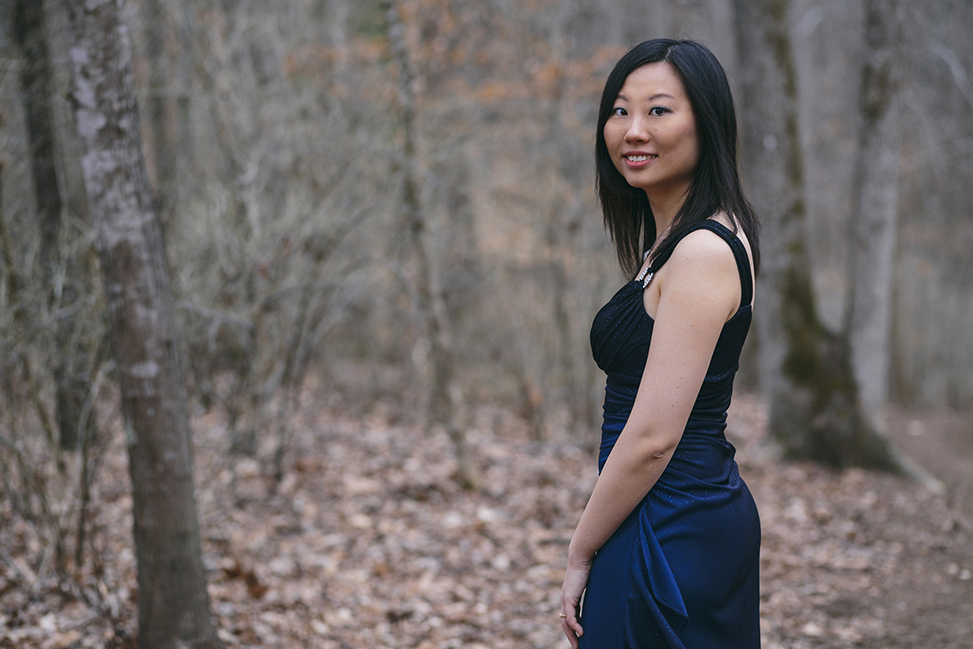 Besides performing the traditional repertoire, Dr. Yang is also an avid contemporary and new music interpreter. The distinguished composer Chen Yi composed the piano concerto Four Spirits for her in 2016. Dr. Yang performed the U.S. premiere of the concerto with the distinguished conductor Maestro Long Yu (余隆) leading the China Philharmonic Orchestra (中国爱乐乐团) in the Carolina Performing Arts series in December 2016. She performed the world premiere of this work with Maestro Huang Yi conducting the China Philharmonic in the Forbidden City Concert Hall in Beijing. In addition, she performed Phillip Glass’s etudes along with the composer himself, Timo Andres, and other renowned artists in the Glass at 80 festival in 2017. She recorded Lee Weisert’s Érard, which was written for her, for Weisert’s album Wild Arc on the New Focus label. Dr. Yang served on the Artist Panel for New Music USA in 2015.

Concert highlights as a concerto soloist include performances with the European Union Youth Orchestra under Vladimir Ashkenazy, the China Philharmonic Orchestra under Long Yu and Huang Yi, the Eastman Philharmonia under Jeff Tyzik, the Pacific Symphony Orchestra under Carl St. Clair, numerous appearances with the North Carolina Symphony under Grant Llewellyn, the Charlottesville Symphony with Laura Jackson, and the Longview Symphony under Tonu Kalam. Most recently, she performed with the Sichuan Symphony Orchestra conducted by Spanish conductor Josep Caballe Domenech, and she also performed with the top Symphonic Band in Spain, Banda Sinfonica Municipal de Madrid.

A sought-after teacher, Dr. Yang has frequently given masterclasses in the United States and abroad in major universities and conservatories such as the Liceu Conservatory in Spain, King’s College London, and Duke University in North Carolina. Her students have won top prizes in state, national, and international competitions. She was featured as one of the three scholars in the acclaimed Chinese national magazine Globe in 2014.

“Yang’s style is extraordinarily lively, awake, and aware of the music’s inner connections, the use of ‘turnaround’ phrases and the like. With further study, and applying herself, I think she could herself be a fine jazz pianist as well as a classical one—she certainly has both the technique and the élan necessary for this. Like so many young pianists, she has a flawless technique, but she possesses qualities that many of the others don’t, particularly her way of incorporating the most difficult technical passages into the ongoing musical discourse and a long view of the music in terms of structure. She also has a gorgeous piano tone… From here, Yang jumps backwards to Chopin’s Ballade No. 4.In her hands, however, it sounds somewhat strange and a bit new. She has the rare gift of being able to take an old warhorse and make it sound fresh… A first-rate recital by a first-rate pianist who knows her stuff and isn’t afraid of challenges.”

“This lovely recital by Chinese-American pianist Clara Yang speaks to the core of what a musical heart means by romance. It might easily have been all-Chopin or all-Schumann, and we would surely come away beguiled by Yang’s light, fluid take on 1840s sparkle and sentiment. But how much better to ‘fold time’ in upon itself and mix in from our own day pieces which speak to the same ardor, ebullience, and nostalgia. The emotional origami of love and loss works in any century, after all…Among the newer works, a real find is Robert Muczynski’s Maverick Pieces…These are short, gleaming, clever, and sonorous pieces, delivered effortlessly and beautifully. I can’t stop playing them!”

“Ms. Yang brought out the subtle variation of color. and the shifts in rhythmic patterns were performed with clarity and the kind of supple freedom that even the most refined orchestral conductor could hardly match…She combined impressive keyboard prowess with probing emotional depth and daring individuality through to the thunderous conclusion. Ms. Yang thoughtfully attended to unraveling Schubert’s musical intent, while giving the score a vividly personalized interpretation. ”

“The pianist for the Rachmaninoff was Chinese-born Clara Yang, now a highly acclaimed UNC music faculty member and recitalist, seemingly too young for the weight of her accomplishments, but extremely effective in the piece. I admired her two years ago, when she performed Beethoven’s Choral Fantasy with Vladimir Ashkenazy and his European Union Youth Orchestra…Clara Yang’s technique was effortless and smooth, and her rendition of the famous 18th Variation romantically memorable. It was wildly and deservedly well received by the audience.”

“Clara Yang ended the concert with an interpretation imbued with introspection, strength, power and delicacy of Schumann’s Humoreske…A precise articulation served by a thoughtful and musical vision captured the poetry, the abrupt mood changes, and the energy and passion that flew from the Schumann’s staves.”

“Yang’s technical skill and artistic sensibility were apparent throughout this performance. At times her fingers moved as fast as seemed humanly possible. Her powerful expression of the Dies Irae plainchant quoted in variation 7 was spine-chilling while the orchestra accompanied with a slower version of the opening motif of the Paganini theme. The mystical quality of variation 17 was enhanced by Yang’s delicate and sensitive touch. The glorious sweeping melody of the 18th variation, had it been an aria in an opera, would have been a show-stopper. Both orchestra and soloist put their all into this extravagant moment which is a peak of romanticism. The closing variations were a blazing and brilliant comet for both orchestra and soloist.”

“Zheng and Yang play (Grieg Cello Sonata) with great intensity and romantic overtones. By comparison, the 2002 rendition by cellist Truls Mørk and pianist Håvard Gimse on Erato is far too restrained and refined… Zheng and Yang have a new recording that demonstrates their virtuosity and depth of interpretation in excellent sound. I recommend it to chamber music buffs everywhere. “

“Clara Yang’s recital was an outstanding achievement. Thank you for giving us great pleasure and reason for admiration.”

“She demonstrated a superb technique and extraordinary musical understanding.”– Peninsula Reviews”How could one not be impressed by the technical solidity, investment and concentration demanded throughout Clara Yang’s recital?…This recital was an impressive accomplishment.”

Dr. Yang has given masterclasses and lectures in many major conservatories and universities, such as King’s College London, the Liceu Conservatory in Spain, the Musical College of the Moscow Conservatory, and the China Conservatory of Music in Beijing. Her students have won top awards in international, national, and state competitions. Recently her UNC students won the first prize at the MTNA Stecher Horowitz Two-Piano Competition national finals. Her students have performed in Carnegie Hall and on renowned series such as Carolina Performing Arts, and they have been accepted into top universities and conservatories for graduate studies. Below are comments from UNC students.

“After four years of teaching, I can easily say that she has been the most impactful professor of my college experience, teaching my far beyond expectation and course subject. She is able to connect with students outside of the classroom, establishing a trust with her students –necessary as learning an instrument can often be a stressful and sensitive practice. In terms of her teaching style, she is positive and honest without being overly complementary. She pushes you and has no problem telling you what you need to improve, but she does so in a way that makes you take ownership for your playing. She suggests improvements while also allowing her students to explore their own ideas about a piece, something I particularly appreciate.”

“She is truly dedicated to seeing her students succeed. I gave my first recital this semester, and knowing how nervous I was, Dr. Yang dedicated extra lesson time to make sure I was ready, as well as numerous conversations about managing nerves and the purposes of sharing music. Dr. Yang is able to bring talent out of you that you didn’t know you had, and creates an extremely curious and friendly environment in which to do so.”

“Dr. Yang is by far one of the most influential professors I’ve had at UNC. Having studied with her for four years, I’ve felt that I have grown tremendously as a musician. Lessons are productive, mentally engaging, and simply fun. She brings insightful and effective feedback, incorporating multiple aspects from techniques for practicing technically difficult sections, relating theory and structure to style and musicality, to even abstract philosophical discussions about the value of music and the emotions it can evoke. Her teaching style is encouraging, friendly, and relatable–inspiring, yet rarely intimidating. In giving suggestions and criticism, she is always clear and never demeaning or dismissive. Dr. Yang is a fantastic teacher and has been a huge factor in my success and enjoyment studying at UNC.”

“Dr. Yang is hands down the best piano teacher I have had. She is excellent at both being critical and encouraging about your work. She’s a teacher you want to do well for just because you respect her so much. ”

“You have been such an amazing teacher, friend, and inspiration these past two years. Words can’t express how thankful I am!”

“I just want to thank you for being an amazing teacher the last few years. I would not be where I am as a pianist now without your guidance and persistence.”