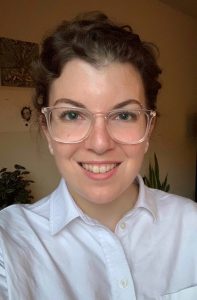 Sophia Maria Andricopulos is originally from the Chicago area. Before coming to UNC, she studied Music and English Writing at Millikin University (B.A. 2014) and Musicology at the University of Oregon (2015–2018). She earned her MA in Musicology from UNC in 2020, completing a thesis which critically engages representations of rock music, identity, and feminism in the TV show Gilmore Girls. Sophia Maria’s research centers music’s technological and discursive mediation in considering the U.S. popular music industry; currently, these concerns inform her preliminary dissertation research into industry and artist responses to digital technologies of music distribution in the late 1990s and 2000s. In 2018, her paper on ideologies of race in journalistic and critical writing during Carlos Santana’s early recording career was named Best Student Paper by the AMS Pacific Northwest chapter, and in 2019 she was named a James W. Pruett Fellow to research the sounds of baseball in American song at the Library of Congress. Sophia Maria co-chairs UNC’s Graduate Music Student Forum through December 2021.