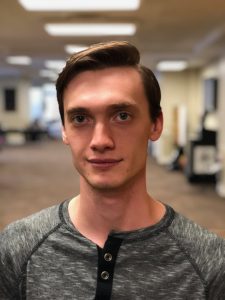 Justin Frankeny is originally from Pittsburgh, PA and completed his Bachelor of Music in both composition and music history at Baldwin Wallace University near Cleveland, OH. His experience as a composer and clarinetist is what initially inspired his research interest in contemporary art music and 20th century art music more broadly. Justin’s primary research interest is in relationships of power surrounding composers, especially in academia. Of special interest is the era of “serial tyranny” in the 1950s-70s, in which the dominance of serialist compositional technique in U.S. academic institutions often limited freedom of compositional expression in young composers. Additional research interests include progressive rock fandom in the 21st century and musical meme culture, especially in relation to Smash Mouth.