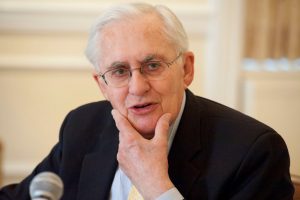 Born in Mount Airy, North Carolina, James W. Pruett (1932–2014) received both his B.A. and Ph.D. from the University of North Carolina at Chapel Hill. He was appointed to the Music Department’s faculty in 1962 as a specialist in music of the Renaissance and also served as Director of the Music Library, one of the nation’s outstanding university collections. He was elected President of the Music Library Association from 1973 to 1975 and edited that organization’s flagship journal, Notes, from 1974 to 1977. In 1987 he became Director of the Music Division of the Library of Congress, where until his retirement in 1994 he oversaw publications, acquisitions, public concerts, exhibits, and the development of a number of new programs. He wrote that he particularly liked “assembling knowledge and art for the future without any certainty as to how it will affect the minds and souls of people to come.”

The Pruett Summer Fellowship Program combines its namesake’s two lifelong interests by offering graduate students in musicology at the University of North Carolina the opportunity to spend two months in the Library of Congress processing collections in the Music Division and purusing research interests of their own. and also undertaking their own research. The program thus honors a distinguished former colleague who had a significant impact on musical scholarship and at the same time serves as a tangible and productive monument to the strong historical connections between our two institutions.