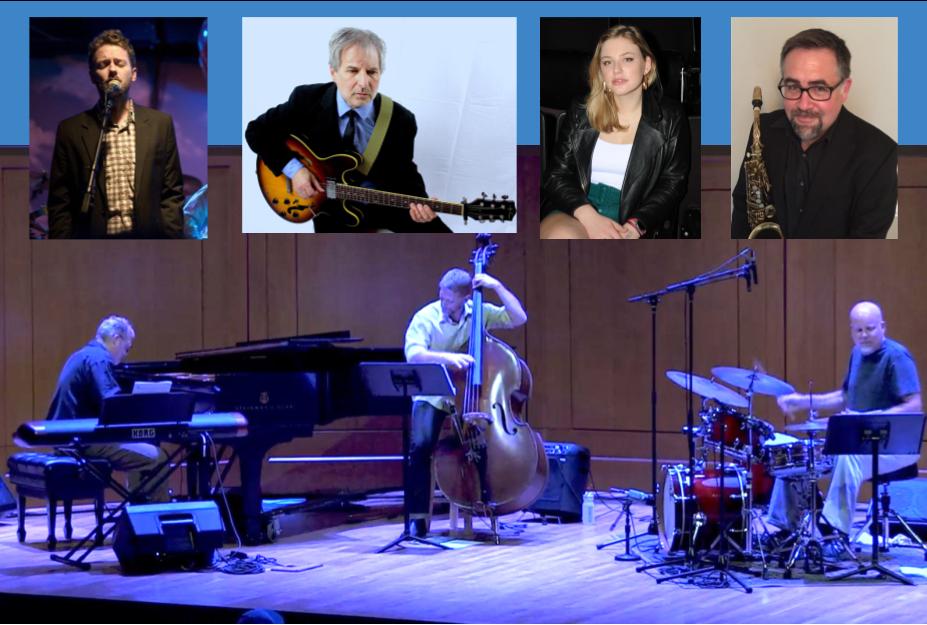 A Brand-New Shade of Blue is a bittersweet song cycle draped in the small-combo colors of the late 50s and early 60s “cool” jazz scene, the era of Bill Evans, Kind of Blue Miles Davis, Chet Baker, and NC’s John Coltrane, with additional touches of Burt Bacharach pop and even 20s Tin Pan Alley. Featuring the sultry stylings of NC vocalists Brett Harris and Ramunė Marcinkevičiūtė, it was composed by Chris Stamey and recorded by UNC jazz faculty, students, and alums in the early, downbeat days of the pandemic. It was, in fact, completed, of necessity, by musicians isolated in their homes or one by one in a studio; this evening’s premiere will be the first time that the music has been played together by the ensemble in public. Also featured on the original recordings (released 2020 on Omnivore Recordings) are stellar moments from Dan Davis (drums), Jason Foureman (bass), Will Campbell and Elijah Freeman (saxes), Ben Robinson (trumpet), and Evan Ringel (trombone). Accomplished studio pianist Charles Cleaver and guitarist/arranger Stamey complete the mix.

This evening is made possible in part by the support of Cat’s Cradle, The Center for the Study of the American South, Schoolkids Records, and by Yep Roc Records, celebrating 25 Years as “the artist-driven label that refuses to be labeled.”

BRETT HARRIS is a singer, songwriter, and multi-instrumentalist from Durham, NC. In 2010 his debut LP Man of Few Words was featured by Paste Magazine’s “Best of What’s Next,” NPR’s “All Songs Considered: Second Stage,” and made several “Best of” lists, drawing comparisons to the work of Nick Lowe, Elvis Costello, Harry Nilsson, and Emitt Rhodes. Additionally, Brett has participated as a core band member in live performances of Big Star’s Third, playing throughout the US in addition to the UK, Spain, and Australia. Noted critic Bill Knopp, in a rave review, said his 2016 release, Up in the Air, “will have lovers of classic pop reaching for the “repeat” button.”

RAMUNĖ MARCINKEVIČIŪTĖ is a Lithuanian jazz vocalist who is currently a student at the University of North Carolina at Chapel Hill. Double majoring in Economics and Media and Journalism, Ramunė was a recipient of the 2022 Fred and Gail Fearing Jazz Studies Award while continuing to pursue her musical career and other professional aspirations at UNC. She released her first single, “I Don’t Think of You,” in July 2020.

CHRIS STAMEY studied composition with Roger Hannay at UNC in the 70s, then, upon relocating to NYC, formed influential 80s rock band The dB’s. During the next decade and a half in Manhattan, he produced many artists, recorded for A&M Records, and toured internationally with a variety of musicians from all genres, including Anton Fier, Carla Bley, Jack Bruce (Cream), Arto Lindsay, Bob Mould, and Michael Stipe (R.E.M.). Upon returning to Chapel Hill in 1993, he started Modern Recording and continued an active producing, arranging, and recording career. His innovative 2011 arrangements for Memphis band Big Star’s Third record have been performed at the Barbican (London) and many festivals internationally, and a full-length concert movie of these, Thank You, Friends (Concord 2017), featured Kronos Quartet as well as icons from the indie pop world.  In 2018 his “songwriting memoir,” A Spy in the House of Loud, was published by Univ. of Texas Press. His one-hour “holiday radio musical” Occasional Shivers, hosted by Branford Marsalis, has become a perennial favorite on public radio. A two-disk collection of other artists performing his compositions, New Songs for the 20th Century (Omnivore 2019), was followed by the studio recording of A Brand-New Shade of Blue in 2020.

‘Musicians from Rod Stewart to Bob Dylan have turned to the Great American Songbook to revive their creative juices. But Chris Stamey has taken a different approach. Instead of singing other people’s compositions, he’s rearranged a handful of old songs and written a raft of new ones that are akin to material for a 1958 recording session by Frank Sinatra or Ella Fitzgerald.’— Geoffrey Himes review, Downbeat Magazine, September, 2019

‘This is a prodigious project that asks for real attention. Fortunately, the gift of this music pays off in timeless beauty and unlimited inspiration. It’s like the past has been reinvigorated by the present, with nothing lost and everything gained.’ — Bill Bentley review, Americana Highways, July 10, 2019

‘”Insomnia” perfectly exemplifies the full album’s intelligence and exuberance for rich harmonic environments and material unencumbered by compositional excess. Not a note is wasted.’ — Pop Matters, May 16, 2019

‘The influence of the Great American Songbook is strong, and the overall sound is much closer to jazz than rock. It doesn’t hurt that Stamey brought in some ringers here: Branford Marsalis on tenor sax, Matt Douglas on clarinet, Jim Crew (along with Stamey himself) on piano, Jason Foureman on bass, and Dan Davis on drums. Django Haskins is the vocalist, one of more than a dozen singers who alternate tracks throughout the album, including Nnenna Freelon, Ariel Pocock, and power-pop maestro Marshall Crenshaw.’ — Jazz Times, June 28, 2019

‘This is a stunning project that will capture the attention of listeners from several genres and from those who bestow awards for such projects.’ — Glide Magazine, June 26, 2019

‘Bravo to Stamey, and hopefully these songs will find their way into live performances and recording sessions by other artists and in some ways become part of a New American Songbook.’ — Robert Baird, 20th Century Globe, July 10, 2019