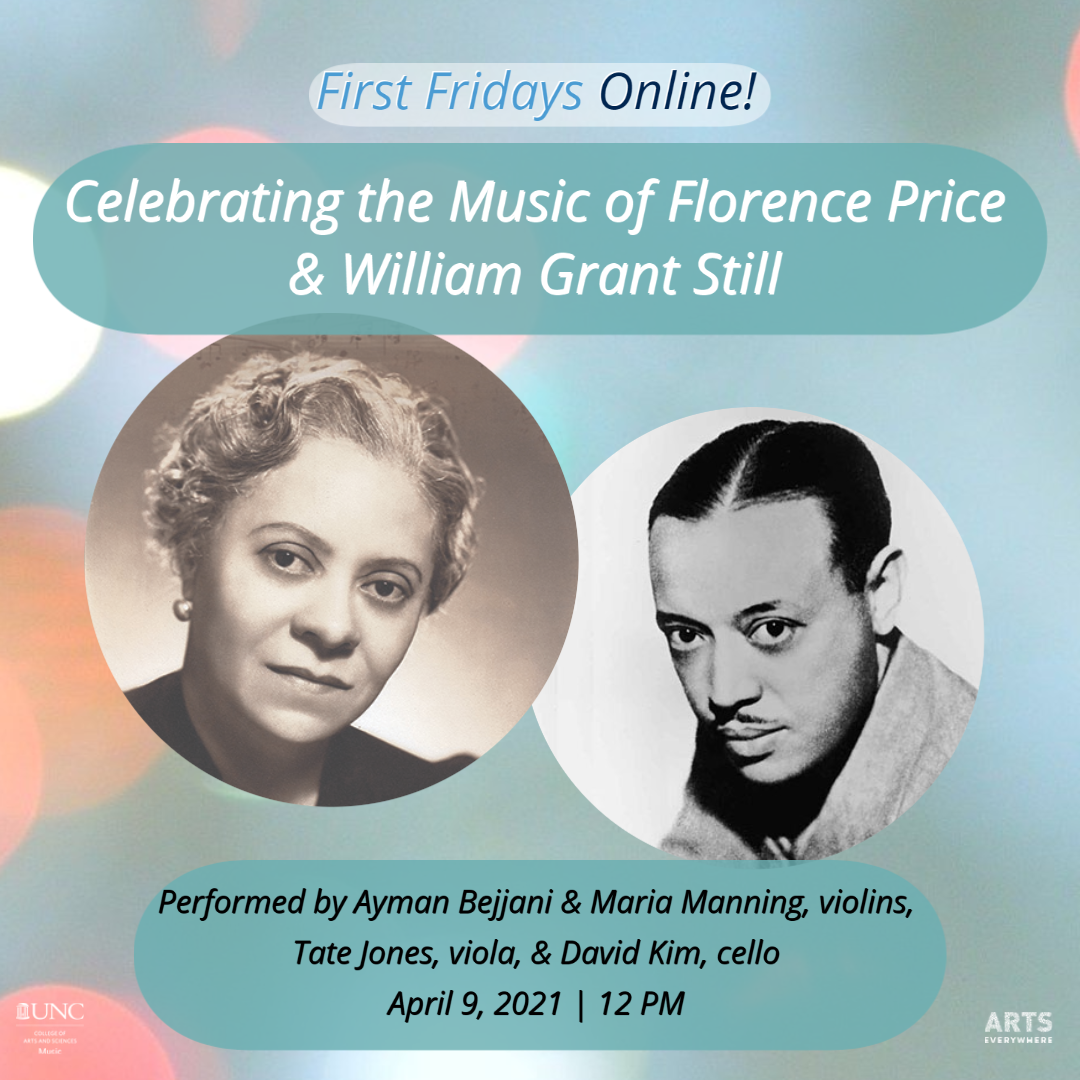 Join us on Facebook for the final First Fridays concert of the semester, Celebrating the Music of Florence Price & William Grant Still! 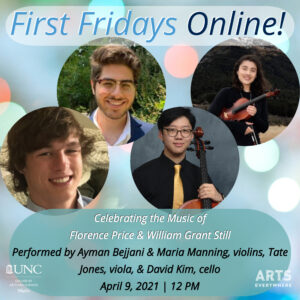 Florence Beatrice Price was born on April 9, 1887 in Little Rock, Arkansas to a mixed-race family. During her childhood years, Price picked up the piano at the age of four and composed her first work at eleven. Price continued her music education at the New England Conservatory of Music where she studied piano and composition. After college, Price moved back to Arkansas but, after several nearby lynchings, she relocated to Chicago, Illinois in order to avoid the Jim Crow Laws of the American South. In her time in Chicago, Price freelanced, working as an organist for silent film screenings and composing songs for radio ads under a male pen name “Vee Jay” (her submissions were more likely to be selected if she appeared to be a man rather than a woman).1 Price lived with her former student and friend, Margaret Bonds, who was also a Black pianist and composer. Through Bonds, Price connected with poet Langston Hughes and contralto Marian Anderson, both prominent figures in the Harlem Renaissance (a Black artistic and intellectual movement during the 1920s and 30s), and both of whom brought Price’s musical gift to light in the African-American community.2 In her compositions, Price began incorporating African-American spiritual melodies and emphasizing the complex rhythm and syncopation of these spirituals. Such is the case with Price’s String Quartet in G Major, where her interest in African-American song and her conservatory education combine to create a beautiful and unique sound with blues elements mixed with European classical techniques.3

William Grant Still was born on May 11, 1895 in Woodville, Mississippi to an African-American family. Shortly after his birth, Still’s mother moved with her child to Little Rock, Arkansas. In their childhood years in Little Rock, both Price and Still were taught by Charlotte Andrews Stephens, the first Black teacher in the newly integrated public school system in Little Rock. After his education at Oberlin Conservatory of Music and his time serving in the military during World War I, Still moved to Harlem, New York where he became heavily involved as an artist in the Harlem Renaissance. During this time, Still often interacted with noteworthy figures from the movement, especially poets such as Alain Locke, Arna Bontemps, Countee Cullen, and Langston Hughes (Price also worked closely with Hughes). Still also became fascinated with the visual artwork of the era such as that of Sargent Claude Johnson, an African-American artist whose work become popularized through the Harlem Renaissance despite Johnson residing in San Francisco, California. One of Johnson’s artwork series, known as “Mother and Child”, consisted of a variety of sculptures and paintings of a mother fully embracing her youngster. In this series, Johnson attempts to showcase the interconnectedness between the African-American mother and her children. These pieces became the basis of the second movement (titled “Mother and Child”) from Still’s Suite for Violin and Piano as “it reminded him [Still] of his beloved madre”, whom he recalls displayed her love as both encouragement and discipline. In “Mother and Child”, Still musically evokes such complexities of maternal love through juxtaposition of several musical devices: major vs. minor, syncopation vs. straightforward rhythm, and stasis vs. escalating tension.4

With the historical contexts of both composers in mind, it is clear that Florence Beatrice Price and William Grant Still make a fantastic and cohesive pairing on a program. Not only were the two similar in their identities as classical musicians and composers of African-American descent, but their paths crossed on multiple occasions. For example, they both experienced childhoods in Little Rock Arkansas where they were taught by the same music instructor, and likewise both contributed significantly to the Harlem Renaissance while interacting with notable figures like Langston Hughes. Though the musical outputs of the two composers are prolific and their distinctive compositional voices undeniable, the climate of their time made it extremely challenging for African-American composers to gain significant traction within the canon. Today, we are extremely excited to present works by the two composers in the hopes of showcasing the underrepresented talent of Florence Beatrice Price and William Grant Still and to highlight the significant impact of these African-American voices in 20th-century American music.

This performance is pre-recorded and will be available after the Facebook premiere on both Facebook and YouTube. Thanks to our co-hosts of this series, Arts Everywhere.