Home / Featured / Get to Know the Music Staff

Last summer we ran a Get to Know the Music Staff series introducing six of our department staff members and what they do to help keep everything running smoothly. Today we’d like to reshare that series and introduce you to the newest member of staff, Austin Seamster!

The staff works hard behind the scenes every day and loves supporting the department in all its endeavors! Get to know El Fisseha, Jay Harper, Jesse Moorefield, Austin Seamster, Angeline Warren, and Cat Zachary below. 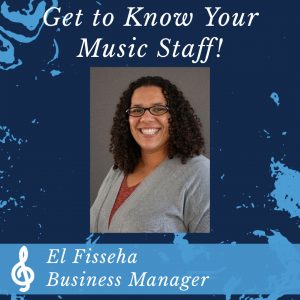 Meet El Fisseha, business manager for the music department! El runs the business operations of the department, including finance and personnel management.  This semester you can find El in her office, Hill Hall 105, Monday through Friday until 2 pm.

El joined the department as a student in 1999. El was a French horn major – and a member of the Marching Tar Heels! – but she’s also dabbled in violin, piano, trumpet, and djembe.

After graduating with her BA in Music in 2002, she began working for the UNC Bands full time in 2004. This past June (2019), she started her role as Business Manager.

When asked what brought her to the department, El said,

“Generally, the amazing people involved in the department drew me in. I immediately felt at home in Hill Hall. But Jeff Fuchs is the real reason I started working for the department. His commitment and devotion to the department, band program, and UNC Music students is inspiring and something I wanted to be part of.”

Outside of the department, El enjoys spending time with her husband of 18 years and three kids aged 15, 12, and 7! She loves hiking with her family, taking her pets on long walks, reading to her kids, and studying To-Shin Do Ninjutsu – the martial art of the ninja from ancient Japan. Yes, El is a ninja!

And speaking of pets, El has two dogs Abbi and Titan, and her 15-year-old has two gerbils, Pikachu and Shinobi. 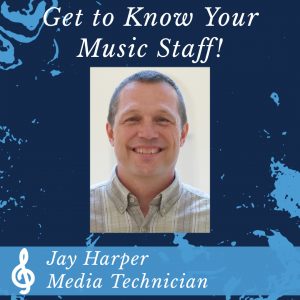 Meet Jay Harper, media technician for the department! Jay is still fairly new to the department, having started in October 2019. However, he was with the communication department before moving to our department so he’s very familiar with Carolina! Before moving to North Carolina, Jay and his wife had a long-distance marriage. He was in Colorado and she was here. In late 2015, they decided it was time for him to join her here in NC. This makes perfect sense because as he put it, “My wife and three children are my world.”

You can find Jay in his office in Kenan Music Building, Room 1212. Most often though, he’s out and about making rounds or assisting someone as his role within the department varies from facilities management, security, and faculty support. Still, he says, “If I’m not in my office, I’ll not be far away. Simply call me office number (919-843-7915). It is forwarded to my cell phone during the day.” 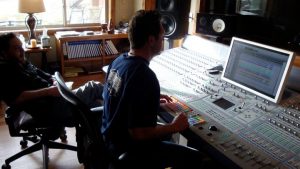 Since the pandemic, Jay’s job has been more of a technical role for the department as we navigate this uncharted terrain.

“I’m currently, working alongside Jesse handling video and audio needs. To ensure things run as smooth as possible, I also get to work alongside my other colleagues. I’m thankful to be part of a fantastic team.” 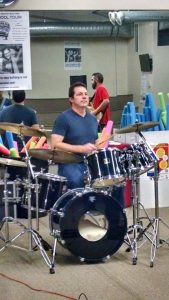 Jay was drawn to working for the music department because of his long-held love for music. Jay said,

“Growing up in my grandfather’s music store, music has always been a part of my life. My undergraduate degree is in Music. I’ve spent my entire career in the music and entertainment industry.”

Jay plays a few instruments, but behind a drum kit is where he’s most comfortable.

“I also enjoy playing lots of other percussion instruments. The vibraphone is my favorite instrument. In my career, I’ve also played ukulele, guitar, bass guitar, tuba, and saxophone.”

Outside of work, and aside from spending time with his wife and kids, Jay really enjoys exploring. Most often, in the form of hiking.

A fun fact about Jay is he and his wife actually met in high school, although they never dated then. They went to a performing arts school in San Diego and performed in a lot of the same groups.

“I’m grateful we still get to make music together,” Jay noted. 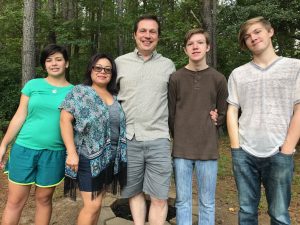 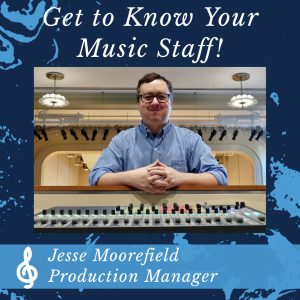 Jesse’s office is a little hard to find but “if you follow the sound of clarinets you will find me in Hill Hall, room 102,” Jesse noted. His office is next to Professor Oehler’s clarinet studio. But, most of the time you will find him in Moeser Auditorium.

“During the day I’m coordinating logistics for upcoming performances or events in Person Recital Hall, Kenan Rehearsal Hall, and the James and Susan Moeser Auditorium,” Jesse said. “In the evening you can find me mixing live sound, running stage lights, and/or stage managing depending on the performance’s needs.”

“I also manage a student production crew staff that assists me with the audio and video recordings of performances and the post-production that follows. Moeser Auditorium also hosts many events for the campus and community at large and I work with these groups to meet their event production needs,” he noted.

Jesse has been with UNC for over 10 years. He first started working at UNC for the Department of Communication’s Media Lab. He then moved to the music department in 2015 as the Media Technician, and this past fall (2019), Jesse started working as the department’s production manager.

“Working with musicians and the music they make is a passion of mine,” Jesse told us. “As a student in the Hayes School of Music at Appalachian State University, I fell in love with being part of a musical community on a college campus. Joining the UNC Department of Music has been a perfect fit and I have really enjoyed being part of UNC’s music community ever since.”

Jesse first came to Chapel Hill for an internship with the Kitchen Mastering studio in Carrboro. “It’s an amazing audio mastering facility,” he said. “I completed this internship as part of my degree in Music Industry Production from Appalachian State University. I fell in love with Chapel Hill and Carrboro and decided to stay.”

Jesse and his wife Anne have three dogs, Pie, Elliott, and Pikachu. He enjoys cooking and hiking/camping, and playing and recording music with his friends! Jesse not only works behind the musical scenes, but also plays the clarinet, guitar, and drumset!

A fun fact you may not know about Jesse?
“I love the television show, Survivor, and hope to compete one day!” 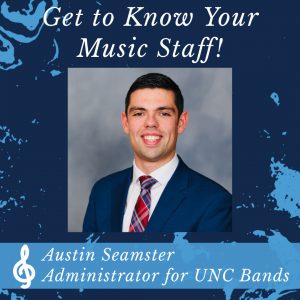 Meet Austin Seamster, Administrator for UNC Bands! Austin is the newest member of the staff team, having joined just a couple of weeks ago. Austin can be found in the Band Office, Hill Hall 106, most of the time, but he expects that to change soon.

” I’m sure once the school year starts you could also find me racing (safely) around campus in the band van.”

Austin’s job duties entail a “little bit of everything” ordering band camp meals, organizing merchandise for students to receive next week for band camp, maintaining the member database, communicating with students, etc. If you have a question about UNC Bands, Austin is a great place to start!
Austin is a great Bands resource, not only because it’s his job, but also because he’s an alum himself! Austin played trumpet during his time at Carolina and graduated just a few years ago in 2018. 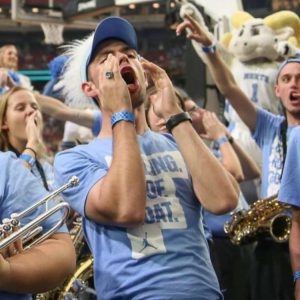 “The band has always held a special place in my heart since my time here as a student, and I love being around the staff and the students.”

Outside of the life of UNC Bands, Austin enjoys chess, tennis, watching Carolina sports, and being outdoors. One of Austin’s favorite memories with the band is the 2017 NCAA Men’s Basketball Championship (pictured right).
“This is a picture from 2017 when I was fortunate enough to travel with the Pep Band for the Men’s Basketball National Championship game. This trip ended a lot better than our championship run a year before…” 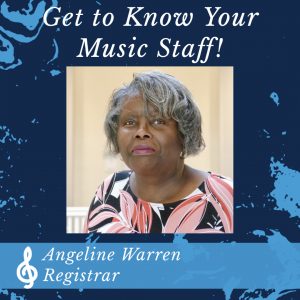 Meet Angeline Warren, our department’s registrar! You can find Angeline in her office, right off the rotunda in Hill Hall, room 105A. She noted, “my office hours are posted on the door, and I’d love to meet you!”

Angeline started out as a temporary employee at the university and has been a permanent employee since July 1991. She started in the music department in June 2004.

When asked what drew her to the department, Angeline told us, “I really enjoy working with the students and getting to know them. It’s always a joy when they come back to visit after graduation and update me on their life!”

“The music department is a great place to work with such great faculty and staff. It is a joy to come to work.”

Outside of work, Angeline loves to read, go on walks with friends, travel, volunteer at her church, bowl, and play a few computer games. She also enjoys attending Playmakers and Carolina Performing Arts performances.

Angeline also let us in on a couple of fun facts that you may not know about her:

“I’m in a bowling league which I really enjoy and like meeting new people who love to bowl. The other thing I enjoy is having my beautiful flower garden with flowers to look at,” she said. “Two of my favorite church activities I help with are the In the Spirit Concert & Silent Auction Fundraiser and The St. Paul Community 5K Walk & Run.”