Douglas Shadle (M.A. 2006, Ph.D. 2010) is an Associate Professor of Musicology and Chair of the Department of Musicology and Ethnomusicology at Vanderbilt University’s Blair School of Music. A specialist in American orchestral music history, he is a two-time winner of the ASCAP Deems Taylor/Virgil Thomson Award. His first book, Orchestrating the Nation: The Nineteenth-Century American Symphonic Enterprise (Oxford, 2016) also received the inaugural H. Robert Cohen/RIPM Award from the American Musicological Society. Dr. Shadle was recently named a 2021 Chancellor Faculty Fellow, along with eight other faculty members across Vanderbilt University.

Can you give us a short synopsis of your book?
Dr. Shadle: This book narrates the creation and reception Antonín Dvořák’s famous “New World Symphony” within the context of Jim Crow America. Dvořák came to the United States in 1892 to lead a conservatory in New York City, and he quickly became embroiled in several ongoing debates about the nature of American musical identity. As we might expect, these debates centered on issues of race and the history of enslaved people in the USA—topics that remain pertinent today. Just as Jim Crow laws sought to exclude African Americans from full civic participation, many white musicians opposed the idea that Black music was a part of the national cultural fabric. But Dvořák disagreed, arguing that Black music was quintessentially American. Although the symphony itself engages only mildly with Black musical sources, its symbolic importance as a reflection of broader discussions about race and music enabled it to shape American culture in profound ways.

How does Antonín Dvořák fit into your overall research interests?
Dr. Shadle: A person might describe my broad research specialty as American orchestral music, so what I’ve done in this book is contextualize the New World Symphony within American cultural history more broadly. The book is clearly written from the perspective of an American historian. 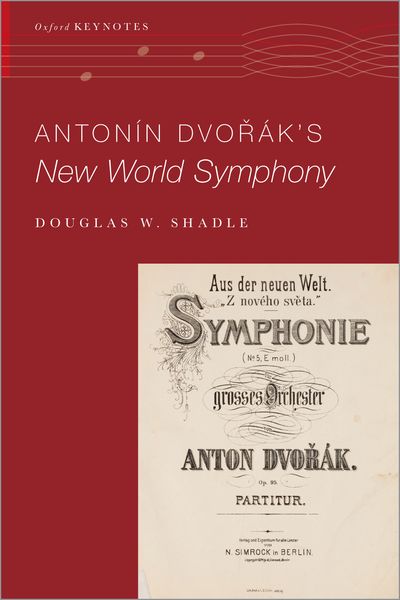 What inspired you to write this book in particular?
Dr. Shadle: My first book, Orchestrating the Nation, tells the story of American symphonic music throughout the nineteenth century. Since Dvořák wrote the New World in 1892, it makes a brief appearance at the end, and I wanted to flesh out its significance within the broader story I told in that book. In a sense, my new book is a beefed-up epilogue to Orchestrating the Nation, and I hope readers will think about reading them together (although it’s not necessary!).

Were there any surprises along the journey of writing this book?
Dr. Shadle: The biggest surprise was the fact that I continued to find fascinating source material about the New World Symphony even after I was done writing—that it was a staple in Cold War musical diplomatic efforts, for example. This piece has been a part of the national cultural fabric for over 125 years, and it would be difficult to overstate its importance in the development of US classical music culture. I’m sure I’ll keep finding things that very well could go into a second edition!

If readers could take away one thing from this book, what do you hope it would be?
Dr. Shadle: This book exposes classical music’s deep historical investment in racist logics. My hope is that by articulating this historical reality, the American classical music industry can move more readily toward equity and justice.

Pick up your copy of Douglas Shadle’s Antonín Dvořák’s New World Symphony, directly from Oxford University Press website or anywhere books are sold! Or explore the book online via the Music Library here!