Welcome to Book Notes! This new weekly series will feature recently released books by some of our musicology graduate alumni each Thursday in May. In this inaugural installment, we’re featuring Dr. Naomi Graber and her recent book, Kurt Weill’s America, published by Oxford University Press on April 27, 2021.

Dr. Naomi Graber graduated from UNC in 2013 and is now an assistant professor of musicology at the Hugh Hodgson School of Music, University of Georgia. Her dissertation, “Found in Translation: Kurt Weill on Broadway and in Hollywood, 1935–1939,” earned her the Glen Haydon Award for an Outstanding Dissertation in Musicology. She is the recipient of the Rhonda A. and Robert Hillel Silver Award from the Carolina Center for Jewish Studies, as well as fellowships to study at the Library of Congress, the Arnold Schönberg-Centre in Vienna, and the Kurt Weill Foundation. Her research centers on twentieth-century American music, especially the Broadway stages of the 1930s and 1940s. She is also interested in modern representations of gender in Broadway musicals and Hollywood film scores. Her publications have appeared in American Music, The Journal for the Society of American Music, and Studies in Musical Theatre, and she teaches classes on American Popular Music, Music in the United States, Modernism and Music, Film Music, and Music after 1750.
Can you give us a short synopsis of your book?

Dr. Graber: Throughout his life, German-Jewish composer Kurt Weill was fascinated by the idea of America. His European works depict America as a Capitalist dystopia. But in 1935, it became clear that Europe was no longer safe for Weill, and he set sail for the New World, and his engagement with American culture shifted. As an outsider-turned-insider, Weill’s insights into American culture were unique. He was keenly attuned to the difficult relationship America had with her immigrants, but was slower to grasp the subtleties of other issues, particularly those surrounding race relations, even though his works reveal that he was devoted to the idea of racial equality. The book treats Weill as a node in a transnational network of musicians, writers, artists, and other stage professionals, all of whom influenced each other. In reframing Weill’s relationship with immigration and nationality, the book also adds nuance to scholarship on the relationships of immigrants to their new homes, moving beyond ideas that such figures must either assimilate and abandon their previous identities, or resist the pull of their new home and stay true to their original culture. 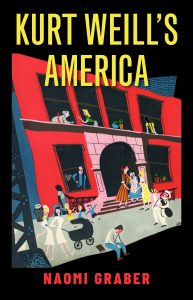 How does Kurt Weill fit into your overall research interests?
Dr. Graber: I am interested in Broadway as a whole, and Broadway of the 1930s and 1940s in particular, so he fits right in. I’m also interested in the generation of immigrants who fled Nazi Germany and ended up in the New World. Most of those ended up either in Hollywood or in higher education, but Weill’s position on Broadway is unique.

What inspired you to write this book in particular?
Dr. Graber: I was inspired to write this book after discovering the music of Kurt Weill in graduate school. I was researching Kander and Ebb’s Chicago, which I learned was based on Weill’s Threepenny Opera and Love Life. This led to me Weill’s other works, and I fell in love. I was also interested in Weill’s Jewish life; he was the son of a cantor who rediscovered Judaism in the United States.

Were there any surprises along the journey of writing this book?
Dr. Graber: I was surprised to learn of the extent of Weill’s engagement with U.S. folksong. Since he is usually associated with European jazz, the work songs and cowboy laments that form the basis of Railroads on Parade and Down in the Valley were an interesting discovery. Weill did a lot of research, reading books by people like John and Alan Lomax, Carl Sandburg, and B.A. Botkin, which are not figures who are normally associated with the composer.

If readers could take away one thing from this book, what do you hope it would be?
Dr. Graber: I hope readers come away with a fuller picture of Weill. Most people think of him only in association with The Threepenny Opera and the Weimar Republic, but he was an important and influential figure on Broadway as well. Most of his shows aren’t easily revived because they are steeped in the culture of the period, but they provide snapshots into an important era in Broadway history, and the music is beautiful. I also hope people will have a better understanding of the history of immigration in the United States, and of how immigrants have both influenced and been influenced by U.S. culture.

Kurt Weill’s America is available on the Oxford University Press website and amazon.com. Or explore the book online via the Music Library here!