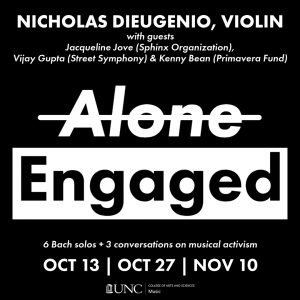 COVID-19-induced isolation has proved a worthy adversary to musicians who thrive on collaboration and performance, both of which have been nearly impossible since March. The UNC Department of Music has been able to overcome some of these challenges recently, but students and faculty still have to deal with the isolation of largely not being able to play music together as they normally would. However, Associate Professor Nicholas DiEugenio is finding innovative ways to re-engage musicians with his new mini-series, “/Engaged.”

Each episode features two solo performances by DiEugenio from J.S. Bach’s Sonatas and Partitas as well as an interview with a guest artist. His first episode featuring guest artist Jacqueline Jove of the Sphinx Organization is already up on the music department’s Facebook and YouTube, and the department is eagerly anticipating his second episode featuring guest artist Vijay Gupta of Street Symphony, which will premiere next Tuesday, October 27th at 7:30 PM. And the final episode, which will air on Tuesday, November 10th, will feature an interview with guest artist Kenneth Bean, conductor and founder of the Primavera Fund.

In this new mini-series, DiEugenio takes time to honor one of the most classic works of the violin repertoire while also reconnecting with colleagues who have been distanced through quarantine. In Professor DiEugenio’s own words,

“when I play the music, I don’t really feel alone, so much as I feel engaged with the music itself… And so I started also to think about what kinds of engagement really mattered to me and my life, and how can I share?”

When asked about his motivation for creating the series, he remarked, “…there are a lot of stories contained in the Sonatas and Partitas of Bach, himself, but also stories in the music, and stories in a way, if you take the time to go through these stories, you can possibly find some resonance within your own life.”

He thought of his colleagues throughout the music industry, the incredible social justice and accessibility work they are doing, and wanted to allow them a space to share their voices and stories.

“I had no idea there were entire aspects of their stories I had never heard before,” he said. He noted how these interviews have also given him ideas for new ways to engage in his community and social justice movements that incorporate and uplift people through music. Being able to reconnect with colleagues in new ways has not only helped DiEugenio but also has the potential to impact the music department as a whole.

Speaking on future outcomes of the project, DiEugenio said,

“what I’m hoping is that this is the start of a much broader kind of engagement between not only me, but all of my colleagues in the music department, and members of the community.”

He expressed interest in helping create “a center for musical engagement that would be housed at the Department of Music” that would be able to give more spaces for voices to be heard using music as a medium of communication, as well as sponsor future projects like this series that may have the ability to reach beyond the scope of UNC, such as his conversations with colleagues out of state.

In finding ways to cope with the isolation the pandemic has caused among musicians at UNC and everywhere, DiEugenio has found another way students and faculty can engage in music and how to shift that into a conversation as well.