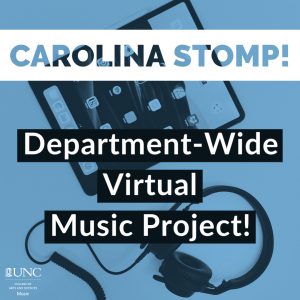 Shortly after UNC announced in mid-March that it would extend spring break and transition to online instruction, ensemble directors from the Department of Music met to come up with a plan. They had to find a way to transition.

Though the coronavirus pandemic had already put a stop to any in-person gatherings, ensemble directors wanted to still make music with their groups.

“We quickly realized, ‘Wait a second. We can do that,’” said Wind Ensemble director Evan Feldman.

That’s when the idea for the “Carolina Stomp” department-wide virtual music project came about. Like many ensembles and bands around the world, Feldman and other directors decided they’d put together a piece of music by combining videos of artists performing remotely. Feldman enlisted the help of Lee Weisert, an associate professor and composer in the department, to arrange a new version of UNC’s alma mater, “Hark the Sound.”

Video submissions from all department students — both undergraduate and graduate, as well as non-majors — and faculty and staff were encouraged in an email sent out April 1. The deadline to submit videos via Dropbox was April 17.

“This would be just our way of saying, ‘We’re making music,’” Feldman said. “‘We’re out there. We’re doing things.’ And let everyone come together for a couple moments and maybe have a little bit of fun.”

Participants could choose from four different tracks, two featuring high-pitched sounds and two featuring low-pitched sounds. One of the primary goals of the department was to make the project accessible for anyone who wanted to participate, no matter a person’s skill level or musical resources they had available.

So, with no prescribed instruments, musicians were encouraged to use their imaginations to make music with their bodies and items found in their homes. Everything from snaps, hand claps, foot stomps to the use of silverware, pens and toilet paper rolls was fair game.

“I’m glad to hopefully bring something fun for the students to work on and lift their spirits a little bit in this lonely time,” Weisert said.

Jesse Moorefield, a production manager in the department, and Jay Harper, a multi-media technician, will be editing together submissions to produce the final video piece. Moorefield will piece together the audio, and Harper will combine the video clips.

“We’re both really excited by it,” Harper said. “We were looking towards a lot of other (similar) videos for inspiration and style and how we could do that.”

“At one time, there’s probably going to be hopefully like 100 different people on the screen playing together from their homes,” Moorefield added. “It’s pretty amazing that we can do this.”

Feldman hopes that contributing to a collaborative project like “Carolina Stomp” will ease the feeling of isolation while many practice social distancing. Especially for students who are having to finish their time at UNC away from Chapel Hill.

“The fact that it’s something related to Carolina gives them a little bit of connection to Carolina,” Feldman said. “Some folks are missing that, especially seniors who are being essentially robbed of their final senior experiences. Although it’s not ensemble music making, I think knowing that you’re contributing to a collective is useful.”

The department didn’t make participation in “Carolina Stomp” mandatory. Feldman said that’s because, “even if the final product looks like it,” the virtual project can’t replace the communal aspect of music making.

“It’s (going to be) a great (final) product,” he said, “but let’s all just remind ourselves and keep reminding ourselves, ‘This is not what we do.’”

For now, though, he and others leading the project are glad they can at least give members of the UNC Music family some way to come together.

“Hopefully it’s something that they just have a lot of fun with and can kind of regain that sense of community that is diminishing,” Weisert said.