The department is saddened to announce the passing of Howard E. Smither, James Gordon Hanes Professor of the Humanities in Music (Emeritus). Smither was a member of the UNC faculty from 1968-1990. We extend condolences to his wife Ann M. Woodward, Professor Emeritus of Music and former chair of the music department (1988-1996), and their family.

Born on November 15, 1925, in Pittsburg, KS, Dr. Smither was the son of Elbert S. and Ethel (Schwab) Smither. He is survived by his wife Ann M. Woodward, son Thomas A. (Charles Sands), nieces, and nephews. 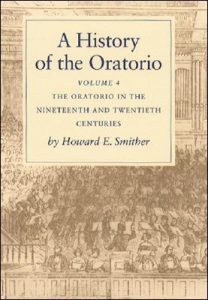 Dr. Smither was an eminent musicologist, scholar, educator, and author. He published the 4-volume A History of the Oratorio (UNC Press, 1977-2000); Oratorios of the Italian Baroque, Vol. I: Antecedents of the Oratorio: Sacred Dramatic Dialogues, 1600-1630 (Concentus Musicus 1983). He was supervising editor of 15 volumes of Oratorios of the Italian Baroque (Concentus Musicus 1983-); editor and translator of poems in Alfred Einstein’s The Italian Madrigal (1971); music review editor of Notes, the Quarterly Journal of the Music Library Association (1967-69); member of the editorial board of Detroit Monographs in Musicology (1971-87); chairman of the editorial board of Early Music Masterworks: Editions and Commentaries (1978-83); member of the editorial board of Videodisc Music Series, National Endowment of the Humanities (1982-86). In addition to numerous articles on oratorio, he earlier did seminal work on rhythmic theory.

The American Society of Composers, Authors, and Publishers awarded him the Deems Taylor Award in 1978 for Volume 2 of his Oratorio History; he was awarded grants on two occasions by the National Endowment for the Humanities, two Fulbright grants, and a Guggenheim Fellowship.

He served as President of the American Musicological Association (1980-82) and as that Association’s representative to the American Council of Learned Societies (1984-88). For many years, Dr. Smither was a lecturer and chairman for panels at regional, national, and international meetings, conferences, and symposiums.

An aficionado of jazz, Dr. Smither returned to an early love of the trumpet, and in retirement, enjoyed playing jazz with various groups, pleasing and amazing his many friends, family, and audiences with his warmth and expertise. Always interested in the visual arts, he painted in acrylic, but his most compelling works were his latest, extensive digital paintings.

The funeral will be held at the Chapel Hill Zen Center with burial at the Carolina Memorial Sanctuary.