Next week the Department of Music is thrilled to host world-class performers Lisa Vroman, soprano, Wiliam Sharp, baritone, Shane Schag, pianist and producer and director Joseph Horowitz for three incredible events centered around the life and music of Kurt Weill and his contemporaries.

Joseph Horowitz is an author, concert producer, and teacher. He is one of the most prominent and widely published writers on topics in American music. As an orchestral administrator and adviser, he has been a pioneering force in the development of thematic programming and new concert formats. He will be discussing his book, Artists in Exile, which was named a best book of the year by The Economist, and was a New York Times Book Review Editors’ Choice. The lecture will also feature video and live performances. Lisa Vroman, William Sharp, Shane Schag, and Department of Music Professor Allen Anderson will also be participating.

Change the World, It Needs It! 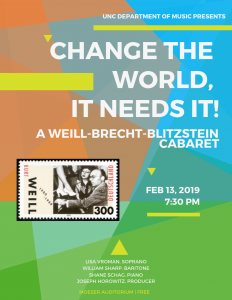 Featuring Lisa Vroman, soprano, and William Sharp, baritone, with pianist Shane Schag. Join these star performers on stage for an intimate and provocatively timely multi-media evening posing the question “What is Art for?” “Can it change the world?” Created by Kim Kowalke and Joe Horowitz; visual track by Peter Bogdanoff.

The program will last approximately 75 minutes with no intermission. All are invited to stay for a post-concert discussion with the performers and creators of the show!

“Kurt Weill became an American from the day he landed in Manhattan in 1935. He told Time Magazine: “Americans seem to be ashamed to appreciate things here, I’m not.” How did he transform himself into an American? A Broadway composer? What, precisely, did America mean to him? Composed in response to the turbulent political times in which he lived, Kurt Weill’s stage works find new resonance today as many of those same issues persist. His operas and musical theater works address subjects – such as the immigrant experience (Street Scene), interracial conflict (Lost in the Stars), greed, corruption, exploitation of the poor (The Threepenny Opera, Seven Deadly Sins, Happy End) – that continue to resonate in today’s headlines. He championed the marginalized and oppressed in his works throughout his career, constantly seeking new ways to give voice to the disenfranchised as he explored new musical forms and crossed stylistic boundaries. Whether antidote or allegory, Weill’s works offer a response to a changing (or unchanging) world.” -The University of Buffalo, College of Arts and Sciences

All three events of this residency are supported by the National Endowment of the Humanities as part of the NEH “Music Unwound” consortium, which promotes cross-disciplinary public programs exploring the history of American music.