Congratulations to Associate Professor David Garcia who was awarded the Bruno Nettl Prize from the Society for Ethnomusicology for his book Listening for Africa: Freedom, Modernity, and the Logic of Black Music’s African Origins. Listening for Africa, in April of 2018, was awarded a Commendation by the British Forum for Ethnomusicology, which “recognizes outstanding scholarship in ethnomusicology written in English.” The purpose of the Bruno Nettl Prize is “to recognize an outstanding publication contributing to or dealing with the history of the field of ethnomusicology, broadly defined, or with the general character, problems, and methods of ethnomusicology.” 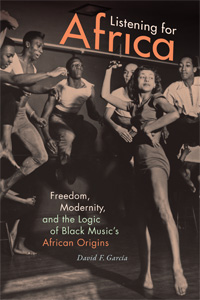 Per the description by the publisher, in Listening for Africa Dr. Garcia

explores how a diverse group of musicians, dancers, academics, and activists engaged with the idea of black music and dance’s African origins between the 1930s and 1950s. …Garcia traces how such attempts to link black music and dance to Africa unintentionally reinforced the binary relationships between the West and Africa, white and black, the modern and the primitive, science and magic, and rural and urban. It was, Garcia demonstrates, modernity’s determinations of unraced, heteronormative, and productive bodies, and of scientific truth that helped defer the realization of individual and political freedom in the world.

Congratulations to Dr. Garcia on another distinguished award for this incredible publication!