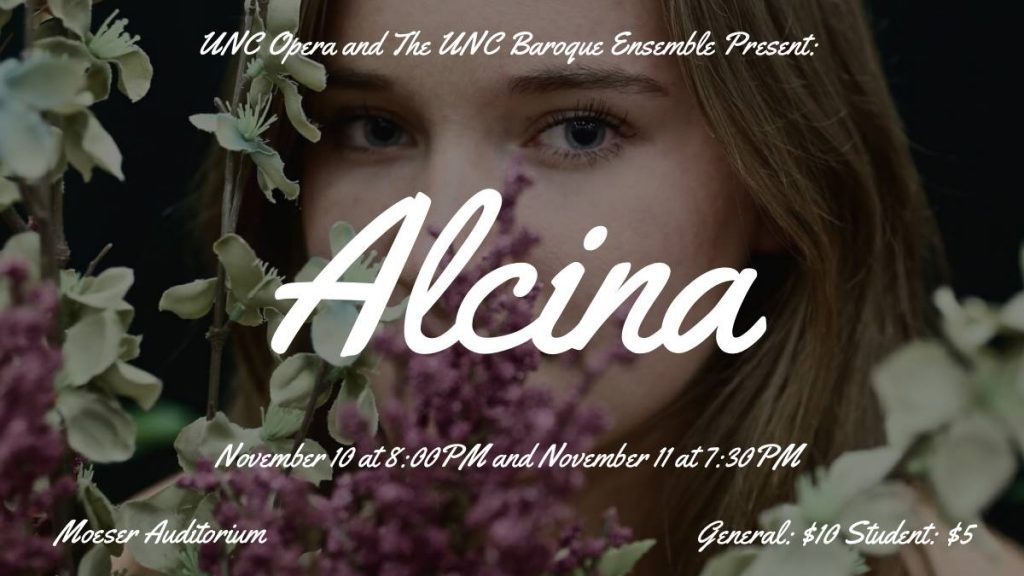 UNC Opera performs a wide range of opera, operetta, and musical theater repertory, including both standard and new works. UNC Opera generally presents one mainstage production per semester, often double-cast with orchestra, in Hill Hall Auditorium, Memorial Hall, and Historic Playmakers Theater on the UNC campus. The company not only serves the educational and artistic needs of the University, but also provides affordable and accessible performances for the community.

This weekend, November 10 and 11, UNC Opera will present a fully staged production of Handel’s Alcina with UNC Baroque Ensemble conducted by Prof. Brent Wissick. Read more about the opera and watch a preview, here. 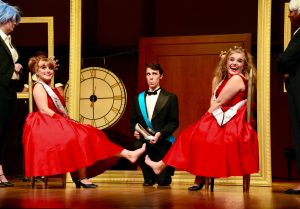 Fledermaus, set in 2015 in Chapel Hill, to commemorate the last opera in Hill Hall Auditorium before its upcoming renovation. Other recent productions include a pairing of Puccini’s Gianni Schicchi and Michael Ching’s contemporary sequel Buoso’s Ghost, the world premiere of Searching for Spinoza (music and lyrics by Thomas Conroy, book by Suzanne Ishee); Mozart’s Die Zauberflöte and La Clemenza di Tito, and Cavalli’s L’Egisto with baroque orchestra conducted by Prof. Brent Wissick.

The Opera has developed a reputation for dynamic American programming, often with a tie to the state of North Carolina. Throughout its history, UNC Opera has presented a variety of works by American composers, including the East-Coast premiere of Robert Moran’s From the Towers of the Moon with the composer and librettist Michael John LaChiusa in residence, the world premiere of James Legg’s The Power of Xingu (with the composer in residence), the NC premieres of Milton Granger’s “talk opera” The Proposal (composer in residence), Richard Wargo’s The Music Shop and James Harp’s The Tale of Johnnie S. Kickey (an adaptation of Puccini’s Gianni Schicchi). Other highly praised productions have ranged from French Baroque opera—Elisabeth Jacquet de la Guerre’s Cephale et Procris—to classic and modern masterpieces such as Mozart’s Cosi fan tutti, Britten’s Albert Herring, and Blitzstein’s The Cradle Will Rock.

UNCOPERA2U is the Opera’s community and educational outreach program, part of our commitment to increased access to the arts. Last year’s Opera cast members brought scenes to a local elementary school, The Telephone to an eldercare facility, and more than 100 area children to a free Student Matinee of Cinderella. For information about arranging a performance for your school or group, contact Director Marc Callahan at opera@unc.edu.

For general information, and to keep up on upcoming events, like us at http://www.facebook.com/uncopera.