Halloween is over and the hundreds of students in costumes have cleared Franklin Street, but UNC Opera is still casting spells. 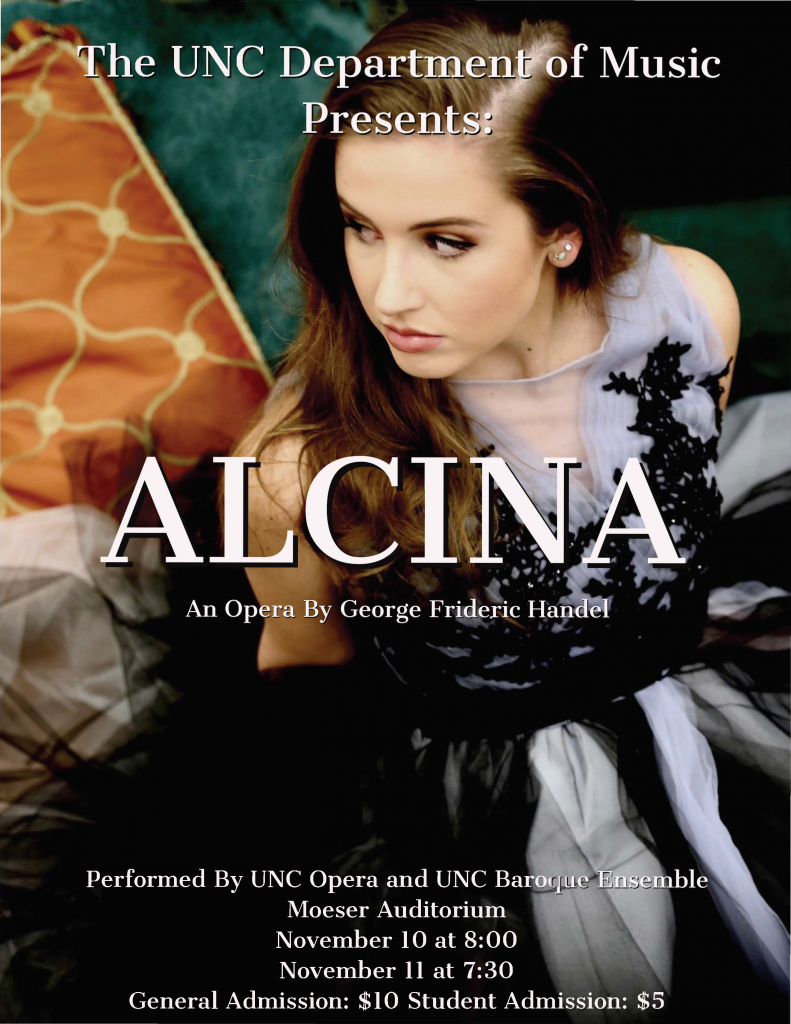 Director Marc Callahan’s group will perform a condensed version of Handel’s Alcina, a Baroque opera, on Saturday, Nov. 10, and Sunday, Nov. 11 in Moeser Auditorium. Saturday’s performance is at 8 p.m. and Sunday’s begins at 7:30 p.m.

UNC Opera presents one mainstage production, double-cast with an orchestra, each semester.

When asked why he chose Alcina, Callahan cracks a smile and his voice quickens in excitement. “Sorceresses and magic,” Callahan said. “Halloween just passed. For me, it’s the magic of the story.”

The main character of the opera is Alcina, a sorceress who creates a magical island where she traps warriors who pass by on ships to make love to them and turn them into anything from stone, waves or beasts.

But she ends up falling in love with a man she doesn’t want to change when she meets Ruggiero. Alcina struggles when she decides whether to continue to use magic or to hope Ruggiero will love her who she is.

“It’s kind of a play on what we present to the world versus who we really are inside,” Callahan said.

“I think it’s very relevant to our idea of social media. Do people like us if we don’t get a ‘like’? Can people just like us for who we are? Or do we have to always have to put forth this pretense?”

The 14-person double cast is made up of 12 women, so many female singers will take on the role of men.

Callahan says this isn’t a concept new to opera. From opera’s origin, women have played the roles of men and vice versa. Traditionally, even castrati have been used.

“In opera, we’ve always been gender bending,” Callahan said. “It’s not a weird thing for us. Society, especially now in American society, the idea of non-binary gender is like, ‘We have to talk about this. We have to discuss it.’ Whereas opera singers are like, ‘Yeah, you’re a dude playing a girl. Or you’re a girl playing a guy. It’s just a thing.’”

Instead of asking his female singers to act as masculine as the male characters they depict, Callahan lets his characters be who they want to be. Callahan and UNC Opera see gender as no more than a social construct.

“We’re not trying to beat into them, ‘You have to walk like you’re on the football team,’” Callahan said.

“You look beyond gender, and you look beyond even voice type. Whenever you look at any of these characters, male, female, non-conforming, everybody wants the same things. They all want to be loved. Some want power. Everybody is, at the base, a human. “They all have the same exact human desires.”

Handel’s Alcina will be a performance filled with societal lessons, excellent music from the Baroque Ensemble and first-class singing.

“(Those who attend are) going to get an amazing musical experience,” Callahan said. “They’re going to hear some of the finest undergraduate singers in the country.”

UNC Opera’s production of Handel’s Alcina is part of the Scholarship Benefit Series. Tickets are $10 general admission | $5 students & UNC faculty/staff. Tickets are available at the door.