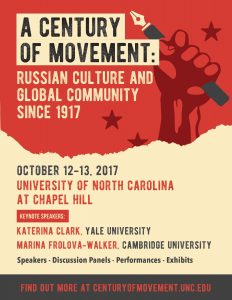 The UNC Department of Music is hosting its biennial conference, the Festival on the Hill, this week on October 12-13, 2017. The theme of this year’s festival is “A Century of Movement: Russian Culture and Global Community Since 1917.” The event will consist of musical and dance performances, speeches, and academic panels — all centered around the aftermath of the Russian Revolution.

UNC graduate students Jamie Blake and Grace Kweon, who both study Russian music, are organizing the conference with help from Professor Annegret Fauser. Blake said their initial concept for the conference was much smaller in scale.

“We thought it would be wonderful to have an event where we could bring in scholars and performers, and really experience the revolution in an all-encompassing way,” Blake said. “The event just grew into a two-day international conference with performers and scholars coming from everywhere and before we knew it, it became Festival on the Hill.”

Two days of festivities will be separated into six sessions, with each focused on a specific topic. Session topics include “Identities and Ideas in Intellectual Migration,” “Cultural Contact Zones and Transnational Encounters,” and “Inside the Curtain: Movement and Boundary.”

The two keynote speakers for the conference are Dr. Katerina Clark and Dr. Marina Frolova-Walker. Clark is a professor of comparative literature and Slavic languages and literatures at Yale University, and is one of the pioneering scholars in Russian cultural studies. Clark’s talk, “Art without Borders: The International Avant-Garde and the Revolution,” will be on the opening day of the event, Thursday, at 11:15 a.m. in Person Recital Hall.

Frolova-Walker is a professor in music history at the University of Cambridge, and is one of the foremost scholars on Soviet Russian music. Frolova-Walker’s speech, “Russian Soul for Export,” will be on Friday, October 13, at 2:00 p.m. in Person Recital Hall.

There will also be two concerts — one on Thursday and one on Friday. Thursday evening’s William S. Newman Artists Series concert is titled “Key Moments in Soviet Composition.” The concert will be a chamber performance featuring UNC faculty and students, as well as guest trumpeter Peter Auricchio in the James and Susan Moeser Auditorium in Hill Hall at 7:30 p.m. Tickets are $15 general admission and $10 students or UNC faculty/staff and can be purchased at the door.

“[Thursday’s] concert really features pieces from the last 100 years, up until 20 years ago,” Blake said. “There is a lot of variety. The goal was to pick Soviet composers from different eras and look at their interpretation of what it meant to write music in Soviet Russia and the Soviet Union at the time.”

Friday’s performance features the UNC Symphony Orchestra and professor Clara Yang, as a piano soloist, performing an all-Dmitri Shostakovich program in Memorial Hall at 8:00 p.m. Tickets are $10 general admission and $5 students or UNC faculty/staff and can be purchased at the door or ahead of time by calling (919) 843-3333.

“Shostakovich is probably the darling of the early Soviet era,” Blake said. “His music is exciting and edgy for its time.”

Blake says that her and Kweon’s inspiration to organize the conference is deeper than to simply educate attendees about the Russian Revolution.

“Considering the way we talk about human migration today — people use words like problem and crisis,” Blake said. “What we really wanted to do was facilitate conversation that centered on transnationalism and cultural exchange, and some of the really beautiful things that happen when people move from place to place.”