Home / Featured / Journal: In which the UNC Sackbuts Search for Musical Clues

With the concert complete, our sackbut trio looked forward to the rest of our trek around Europe. We had no more public playing to do, but we also couldn’t justify vacationing for vacation’s sake. It was time to seek out the musical history and culture of each city. We’ll call this searching for clues. Eat your heart out, Carmen Sandiego.

We’re not really sure of the rules for awarding points, but I’m pretty sure the first person who yells “SACKBUT!” as loud as possible gets the points for clue discovery.

Anyway, here is the rest of our trip with as much musical relevance as possible.

Sunday morning we went back to the Salzburg Dome for mass. They were doing the Theresienmesse by Haydn, and it was beautiful. Many clue points were awarded.

After mass we took a terrifying cable car up to Untersburg and hiked around for a few hours. The fog managed to clear just as we reached the summit, and we could see spectacular views of the city and mountains.

The following day we took an early train to Verona, our next destination. In a whirlwind trip we quickly made our way by the Verona Arena, Castlevecchio fortress and bridge, and Juliet’s balcony.

After Verona we headed out to Venice for a day trip and found quite a few musically significant locations. In St. Frari’s Church we found the tomb of Monteverdi (+4). We also passed by the Ospedale della Pieta in a nod to Vivaldi (+3).

The highlight of the day was exploring the Basilica di San Marco. The basilica has beautiful mosaics, a variation of architectural styles, and a picturesque position on the canal. It was a hub of polyphonic music from the late 16th century to the early 17th century.

Here we are on the church balcony with the canal behind us. We decided to go through the museum portion of the church and found multiple large graduals c. 16th century (+3).

But it was near the museum restrooms (take this any way you like) that we stumbled upon bits of the famous painting by Bernini depicting the Piazza San Marco and a procession containing numerous musicians. Some scrutiny revealed another couple of sackbut renderings (+5).

Warning: The following two days have almost no musical merit and exist purely to make the reader jealous.

Our train arrived in Cinque Terre the day after we visited Venice (we also made a quick side stop to see the leaning tower of Pisa on the way).

Our host picked us up in his Land Rover and drove us up a cliff overlooking the clear blue Mediterranean Sea. Near the top of this cliff was the nearly inaccessible pink villa we would be staying in for the next two days.

Our host guided us around what I now will to refer to as Eden. Our entire yard was an abundant garden that we were free to use at our convenience. The tomatoes and cucumbers were a major highlight, but there were also blackberries, oranges, cantaloupe, apples, basil, and limes. We took advantage of this garden at nearly every meal. Did I mention the view was spectacular? To get anywhere outside of our villa, we had to take one of two trails. The first trail went down to Corniglia, and the other, to Vernazza. They were not easy hikes, but we made the trek a few times to go swimming, buy bread, and on one occasion, eat some seafood. Mostly we ate tomatoes, enjoyed the view, and wished we had booked the villa for about three more days. Not to be neglected, our instruments called us to a sackbut trio session. When our two days in Cinque Terre were over, we had a very quick trip to Nice, France, where we saw the Palais Lascaris and its contents. This included a sackbut from 1581 built by Anton Schnitzer. It is one of very few trombones still in existence built before the year 1600 (+10). From there we hiked up to a nearby castle and a beautiful park overlooking the sea. There was a street musician with jingle bells on his ankle who was playing a penny whistle (what a guy) (+3). We swam a little bit and then attended mass in St. Reparte Cathedral. The church was ornate and even contained some angels playing some brass instruments. No sackbuts though.

The following day’s train ride to Barcelona was long, but almost entirely along the Mediterranean Sea, at least providing us with great scenery.

Our first full day in Barcelona we walked straight to the Cathedral. It was built in a gothic style and was one of my favorite churches of the trip. We then travelled around La Rambla and ate some empanadas before seeing the outside of Sagrada Família. At the time, entry tickets were sold out.

Our last visit was the Antoni Gaudí-designed Casa Batlló, where we took an audio-guided tour around the location. The entire building was a work of art that was a joy to walk through. It has been amazingly well-preserved, and Gaudí designed every part of the house. Right down to the furniture, handrails, and doorknobs. For our second and final day in Barcelona, we divided and conquered. I went up to the Montserrat Monastery, and Katie Rose, Mike, and his family saw the musical instrument museum, the chocolate museum, the Picasso museum, and La Sagrada Família. Both trips yielded musical results.

Mike and Katie Rose found three sackbuts that were bad reproductions and probably shouldn’t have been in the museum. Those were worth a whopping -21 clue points. The serpent buccins were authentic though. We can return the lost points. Mike has informed me that the ticket to the chocolate museum might have been the best ticket he’s ever eaten. He and Katie Rose also found a chocolate trombone (+5) and many impressive chocolate sculptures. 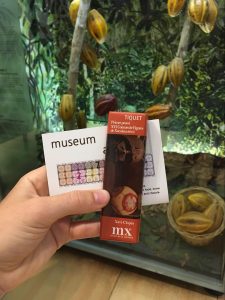 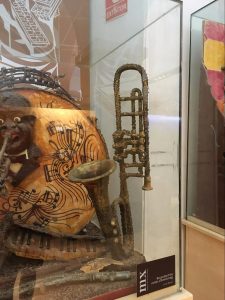 They were at a loss for words at the sight of the inside of La Sagrada Familia. It is an immense cathedral with a spectacular interior. Truly a work of art.

For me, Montserrat was an incredible experience. Mass was beautiful, and the hikes to Sant Jeroni and Santa Cova were spectacular. In the Montserrat museum, there were multiple works by Picasso, Dali, Caravaggio, and Monet, but more importantly, sackbuts were discovered (+5). And here are some photos from the hikes. When we reunited in the evening, we went out for some excellent tapas and prepped for our trip to Madrid.

Our first full day after arriving in Madrid, we made a day trip to Toledo to see the Alcazar Fortress, The Primate Cathedral of Saint Mary of Toledo, multiple bridges of historical significance, and the Mosque of Cristo de la Luz.

Points were scored in the fortress museum when we discovered many of the military figurines were holding instruments. One even had a buccin (+5). 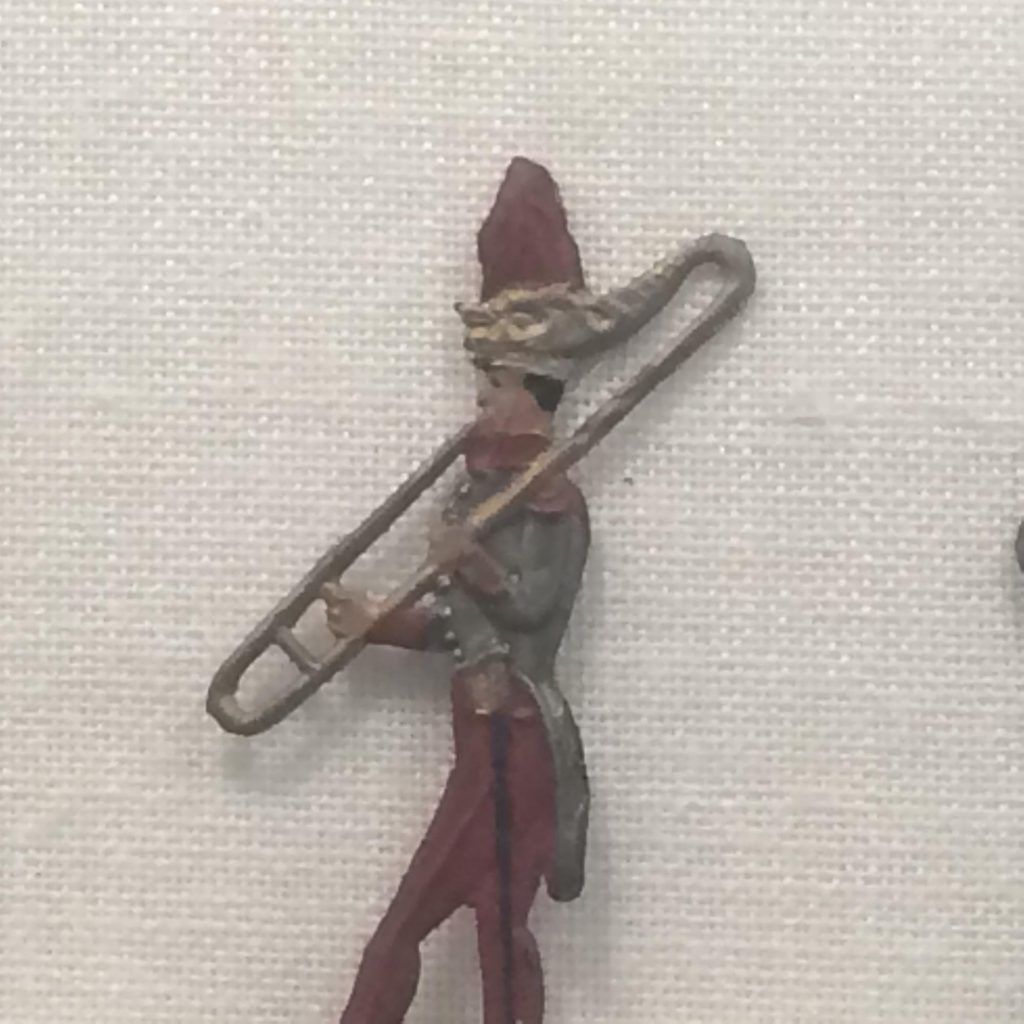 The Toledo Cathedral was a favorite of all of us. It is the second-largest cathedral in Spain and was built in a French Gothic style. The sheer size of it makes you feel tiny as you walk inside. The stained glass was beautiful, and so was El Transparente in the ambulatory of the cathedral.

We didn’t find any trombones, but the choir in the cathedral was extremely intricate.

After returning to Madrid, we spent our final days exploring the city. Our apartment was situated right by the Puerta del Sol, allowing us to walk almost everywhere with ease.

Most of us also managed to try the typical cuisine of bocadillos de jamon and calamares, the huevos rotos, and the churros con chocolate. Food was definitely a highlight of Madrid. So was the sunset at the Templo de Debod.

In total, we managed to visit Munich, Salzburg, Verona, Venice, Vernazza, Nice, Barcelona, and Madrid. Most of these cities are steeped in rich musical traditions dating back for centuries. You see it in the art, the music, and even in the architecture. Our performance focus for this trip was 17th-century music, and the concert in Salzburg provided an invaluable educational experience. My takeaway is that the entirety of our travels provided new context for understanding, appreciating, and performing all music descended from European traditions.

This has been a spectacular trip. Thanks for keeping up with us!