We settled in Salzburg on Tuesday, July 18 after the typical stories one hears associated with travel. Namely lost luggage, crazy people, and according to customs, wet and curly passports.

Just before Salzburg, we initially touched down in Munich and made visits to the Deutsche Museum and the Bavarian Museum to see some of their baroque trombones. The museums were open, but the musical instrument exhibits in both museums were closed for renovation.

We did manage to find one tiny ivory sackbut carving. We’re confident we’ll fare better in our later museum expeditions once we figure out which group member is sabotaging us with their bad luck.

Our first full day in Salzburg was spent exploring many of the set locations from the Sound of Music film. We also found Mozart’s birthplace and his later residence. In a bizarre “It’s a Small World” circumstance, we chanced upon UNC’s very own Mark Katz while roaming around the city. Our second day was spent at Hellbrunn Palace and trick fountain gardens. We were fortunate that one of the collaborating trombonists, Lukas, is a Salzburg native who studied with Mike while he was getting a degree from a rival university we shall not name. He was a great tour guide for us from the moment we arrived. 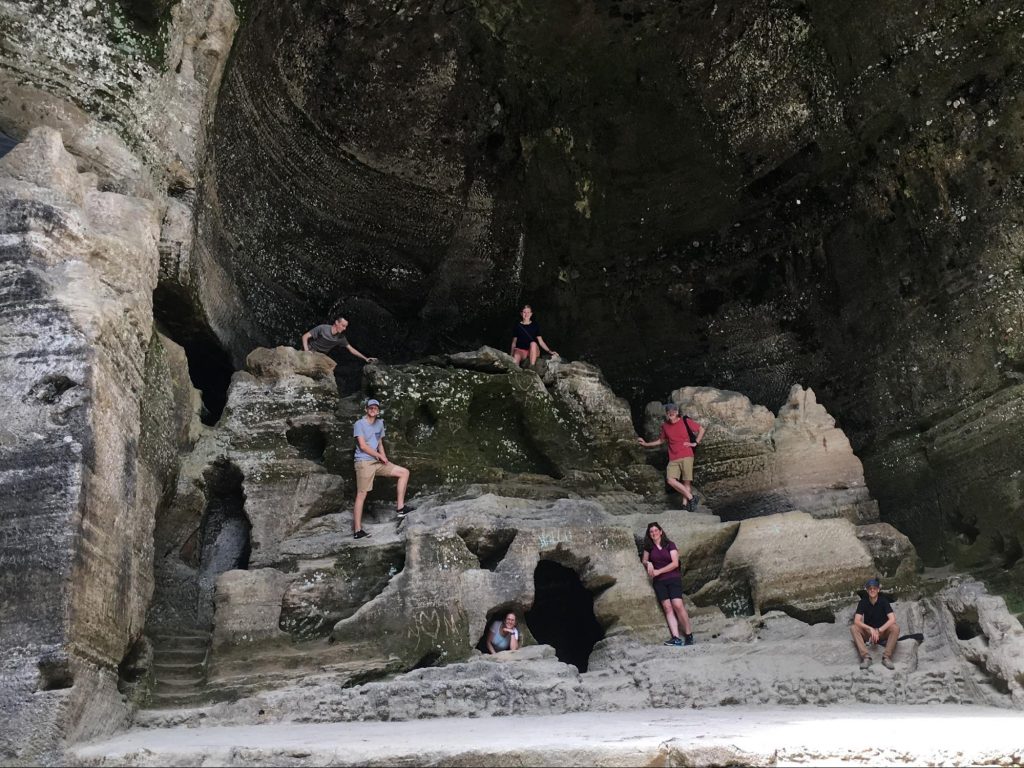 We were all excited for the commencement of rehearsals on Thursday. It meant finally meeting all of the musicians we would be performing with on the concert.

In total, eight sackbut players participated in this collaboration two years in the making. Michael Kris co-led the project with Lukas Schwingenschuh of Salzburg, and they were assisted by professors Norbert Salvenmoser (Mozarteum Salzburg), and Adam Woolf (Utrecht Conservatory and the Royal Academy of Music, London). Each professor brought along students to be a part of the performance. Michael Kris brought along current student Katie Rose Hand, and myself, a graduate, to represent UNC. The last collaborator was Schola Cantorum Basiliensis, which contributed two cornetto players. Our first rehearsal touched on every work to be performed on the concert. We played repertoire from 17th-century Salzburg, including a mass by Georg Muffat, along with sonatas and canzones by composers such as Pietro Lapi and Stefano Bernardi.

Rehearsing the Muffat mass with the Salzburger Dom Choir under the direction of Choir Master Janos Czifra was a major highlight.

If you were wondering:

Yes, the rehearsals were in German.

No, Katie Rose and I do not sprechen.

Fortunately there was a kind choir member who helped point us to the right rehearsal numbers.

We’re often told that music is a universal language, but it quickly becomes apparent when dropped into a rehearsal conducted entirely in German. So unsurprisingly, yet much to our relief, the music prevailed.

In the next two rehearsals we worked on cleaning up the music for the sackbut and cornetto ensembles. The Salzburg Dome provided the perfect space for music of this era, and it was a treat to get to approach this music as it was originally intended; in a 17th-century cathedral, played on historically accurate instruments. We utilized all four balconies in the sanctuary during the performance of the mass, but some of our small ensemble works were split into two choirs that played towards each other on opposing balconies. The sound carried beautifully in the space. The final chords of each piece rang for what seemed like an eternity. In reality it was probably eight seconds or so.

Between rehearsals our group ate meals in scenic Salzburg locations and hiked up to the Hohensalzburg Fortress. There were some stunning views of Salzburg, and finally a museum with a trombone in it. Our concert was performed on Saturday, July 22 in front of a sold out crowd. It was the first performance in the Salzburg Dome for the 2017 Salzburg Festival. The concert was an unforgettable experience. The choir was centered in front of the altar with the trombones in front of them for the mass. String players, woodwinds, brass, timpani, and organ were placed in the four balconies. Between mass parts, the sonatas and canzones were performed by our collective of sackbuts and cornettos in front of the choir. Despite limited time to put this concert together, the music came together wonderfully and was well received by the audience. I can’t speak for every musician, but the three of us found it impossible not to be moved by the fact that we were playing this particular music in such a historic cathedral.

It is an eye opening experience to be working with musicians from all over the world, each of whom have different approaches to how specific works of early music should be performed. We all gained a tremendous amount from this collaboration and feel particularly grateful to have experienced it. We’re not done with our travels just yet. Stay tuned for more from Verona, Venice, Vernazza, Nice, Barcelona, and Madrid.